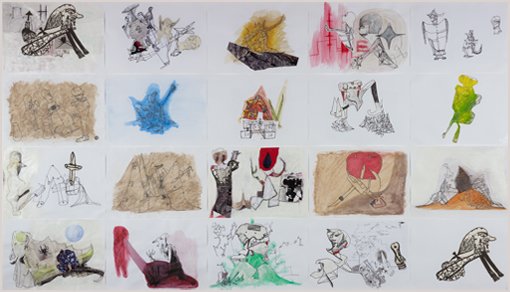 The Dobell Prize is the most respected award for drawing in Australia.

Initiated by the trustees of the Sir William Dobell Art Foundation, this annual prize was first awarded in 1993. The winner now receives $30,000 and the work is added to the Art Gallery of NSW collection.

The Dobell Prize has always been the subject of discussion and debate about the nature of drawing. What constitutes a drawing is deliberately not outlined in the conditions of entry. That has been left for competing artists to define by their practice and for each individual judge, annually appointed by the trustees of the foundation, to determine in the process of looking at all the entries. This flexible, open-minded approach has ensured that the greatest variety of drawings is submitted each year.

This year’s judge was artist Aida Tomescu, and the winner is Gareth Sansom’s Made in Wadeye.

The Dobell Drawing Prize 2012 marks the final year of this competition. After 20 years, the Art Gallery of NSW and the Sir William Dobell Art Foundation have confirmed a refreshed approach to the exhibition of contemporary Australian drawing at the Gallery with a new initiative – the Dobell Australian Drawing Biennial – to be launched in 2014.