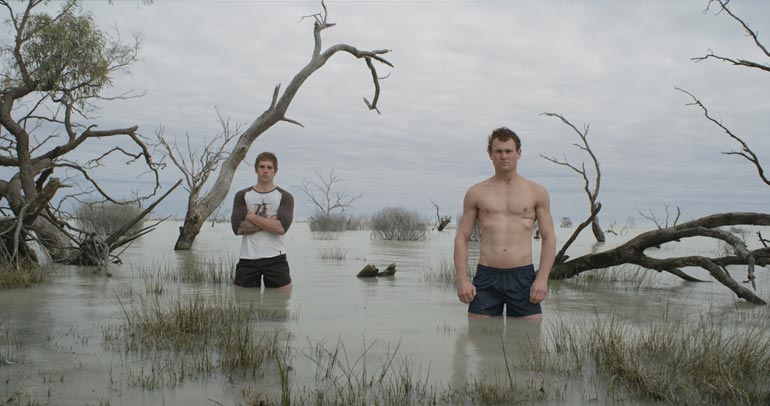 These two new video works were filmed on location in the clay pans and desert lakes of outback New South Wales. In these spectacular and unforgiving environments, two staged performances unfold, exploring the relation between the subjects and landscape from a postcolonial perspective.

Cut Colony I (whip) 2012 depicts a female dancer performing a series of fouettés on a barren plain – a classical ballet movement that literally translates as ‘whipped’. Although her nude body might seem vulnerable, her movements are confident and commanding and her gaze direct.

Equally enigmatic, Cut Colony II (lap) 2012 shows two muscular young men standing thigh-deep in the shallows of a vast inland lake. Like the dead trees that punctuate the water, they remain still while ripples pass them by. Although the men are not naked, their body language suggests a degree of self-consciousness and discomfort.

In dialogue with one another, these concentrated and highly contrived scenarios invoke a series of binaries – active/passive, barren/abundant, open/contained, composed/uneasy – that remain in tense interplay.