The Field – the inaugural exhibition for the triumphant reopening of the National Gallery of Victoria in Melbourne in 1968 – featured a selection of 74 works by artists working in Australia, influenced by the wave of non-figurative art that swept the world during the 1960s.

This 2009 Australian Collection Focus Room installation features six paintings shown in this seminal exhibition, from the Gallery’s collection, and reassesses The Field and its artists, four decades after its display at the Art Gallery of NSW.

Works by Michael Johnson, Ron Robertson-Swann, Paul Partos, John Peart, Dick Watkins and the American James Doolin reflect the dominance of colour-form painting in Australia in the latter half of the 1960s, presaged by the 1967 travelling exhibition Two decades of American painting. 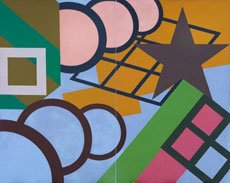