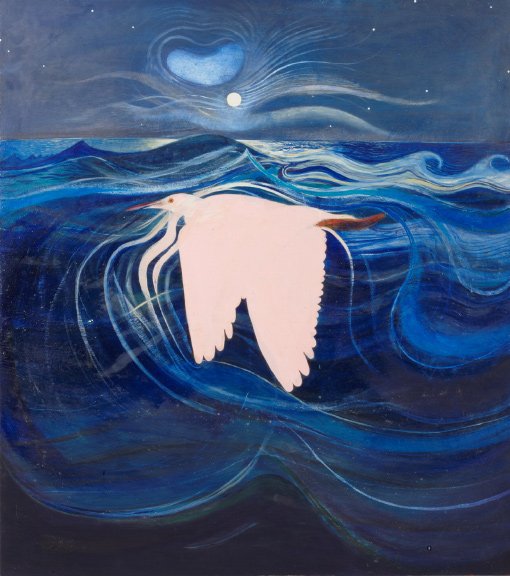 An artist must possess Nature. He must identify himself with her rhythm, by efforts that will prepare the mastery, which will later enable him to express himself in his own language.

Brett Whiteley not only embraced traditional modes of beauty but also notoriously challenged them, and even at times the very aesthetics of painting whose history he respected. This was partly to do with a fear of predictability, but more his belief that his art should seek a contract with the whole spectrum of existence, between light and dark, calm and disruption, life and death. Ultimately these extremities in opposition found greatest resonance for him as an artist through a deep fascination with nature.

At the age of 19 Whiteley was awarded the Italian Government Travelling Art Scholarship by Sir Russell Drysdale, and upstairs at the Brett Whiteley Studio we can see the evidence of his brilliant learning. Two of the four works submitted for the scholarship are on display there: Sofala 1958 and Dixon Street 1959.

Downstairs at the Studio, Whiteley’s story continues with his return to Australia in 1969, and a new embrace of nature here after a turbulent period in New York where he had touched the fringes of insanity. The deep blue of Sydney Harbour, the glistening beaches and the pleasurable lifestyle triangulated by sand, sea and sky struck a chord.

From his Lavender Bay home on Sydney’s North Shore, Whiteley painted his Archibald-winning Self portrait in the studio 1976 and his sun-drenched vista of the harbour, Big orange (sunset) 1974, which is accompanied by two free-standing ultramarine palm trees. His capacity to suspend us in a symphonic state of ecstasy, evoking Matisse’s belief in an art whereby all pain is subsumed, convinces us – for the moment at least – that happiness is possible through a complete immersion in the senses and a willingness to follow wherever nature may lead.