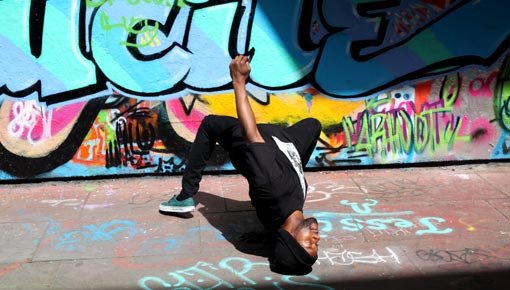 Celebrated contemporary artist Shaun Gladwell is renowned for his mesmerising studies of the body in motion, set against the backdrop of specific sites that range from gritty urban environments to remote vast landscapes.

Gladwell’s practice encompasses a number of mediums, including painting and photography, but he is best known for his video installations depicting improvised and choreographed performances. Often these draw on the extreme movements associated with subcultures such as skateboarding and BMX riding, manipulated to distort the effects of speed and gravity.

His new work for the AGNSW Contemporary Projects series, Broken Dance (Beatboxed), includes a dual-channel video installation in which a beat-boxer performs vocal percussions in a studio opposite a dancer who ‘freestyles’ in a graffiti-marked environment. In synchronisation, the two channels connect performances that occurred at different times and locations.

In addition, two small canvases of the cameras used to produce the video refer to its technical artifice. Covered in graffiti, they also allude to processes of making the public personal, and vice versa, that unfold in urban space.