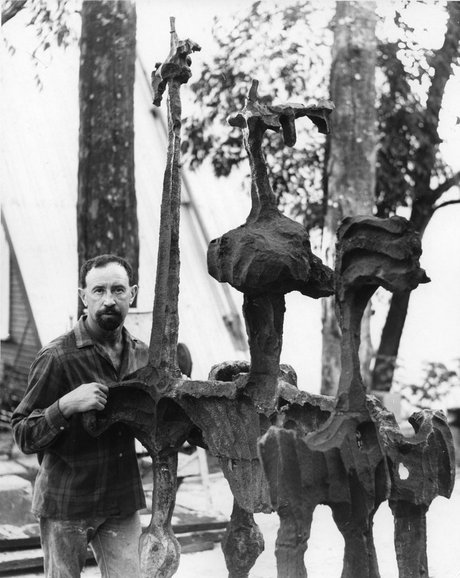 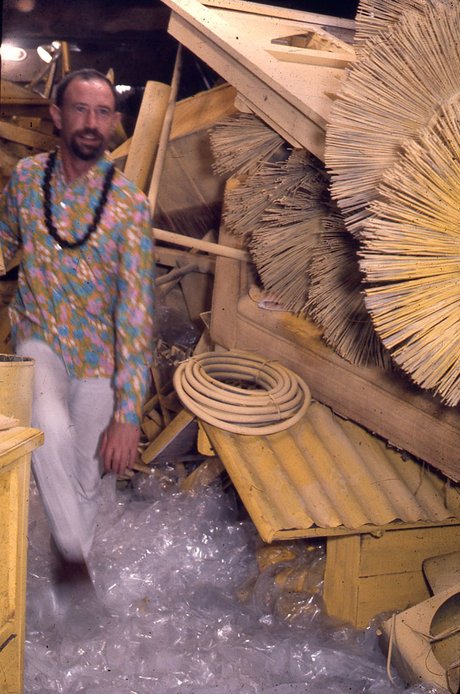 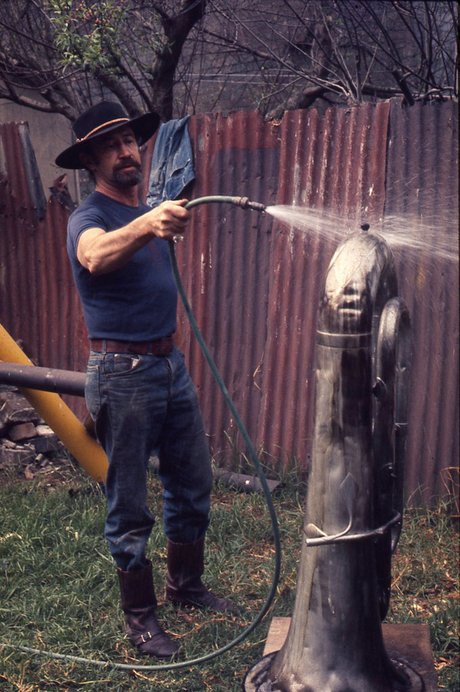 A major public sculptor in Australia, Herbert ‘Bert’ Flugelman is best known for his highly recognisable large-scale works of simplified geometric forms in stainless steel. He was also a teacher of sculptural methods and principals who, over the course of three decades, had a profound influence on several generations of Australian artists.

Born in Vienna, Austria, in 1923, Flugelman came to Australia in 1938 as a 15 year old. Living in Sydney, at 25 he started at the National Art School (East Sydney Technical College), studying painting under Frank Hinder.

In 1951, Flugelman travelled to Europe, where he contracted polio and was hospitalised for a period in London. He remained based in that city for three years, holding his first solo exhibition at Piccadilly Gallery in 1953, then moved to New York.

Returning to Sydney in the mid 1950s, he exhibited paintings at the Macquarie Galleries until 1967. A fire in his studio around this time destroyed much of his work, leading him to reassess his art and shift his focus to sculpture.

His first public sculpture commission had been in 1962: cast-concrete relief panels for the offices of Australian Oil. This was followed by a bronze sculpture for the University of NSW in 1964 and a copper and ceramic fountain for the Australian National University in 1966.

Although his early works were semi-figurative expressionist sculptures, from the late 1960s Flugelman became known as one of the leaders of a new wave of sculpture practices that ranged from object-based to installation, conceptual and performance artworks.

He was involved in running the Tin Sheds art workshop at the University of Sydney from 1969 to 1972, and was a founding member of Optronic Kinetics, a group who produced innovative kinetic sculptures and installation projects including Cubed tree.

‘The 60s were very disturbing for me… I saw myself, standing there with a palette, beret, being “an artist” in inverted commas, and I found it reprehensible. I started to flirt with the idea of making things that were outside the boundaries, and that’s how I finished up starting on the geometric series… I tried to make things that had to make their own way in the world.’

Flugelman’s experimentations in materials such as pottery, fibreglass and aluminium led him to his preferred medium. He developed an enduring interest in creating works that were linked to their broader environment, and the high reflectiveness of stainless steel was an essential part of his work. ‘The sculptures become ambiguous objects in the sense that they reflect their surroundings in a painterly way,’ he later said.

A pivotal point in his career was the six stainless steel tetrahedrons that he first showed at Hawthorn City Art Gallery in 1971, which then appeared in various sites before he buried them in a trench in Canberra as an artwork for the Australia 75 festival. His 1972 show Geometric solids at the Watters Gallery in Sydney was also significant.

Flugelman moved to Adelaide in 1972. A stainless steel sculpture was commissioned for the city’s Festival Centre in 1975, followed in 1977 by another work, The spheres, for its Rundle Mall. In 1976, the National Gallery of Australia in Canberra commissioned Cones.

In 1978, Flugelman was awarded the commission to create the Sir William Dobell Memorial in Sydney’s Martin Place, following a competition, but Pyramid tower attracted controversy and was eventually moved to a new site on the corner of Pitt and Spring streets.

Flugelman worked in an era of profound artistic transition. Often misunderstood, his sculptures became a very visible part of the process of Australians’ acceptance of new contemporary art forms. He also led the way as a teacher, at the National Art School, University of NSW, South Australian School of Art and University of Wollongong (he lived in the nearby village of Jamberoo from 1983).

Flugelman was the subject of an Archibald Prize winning portrait by his friend Guy Warren in 1985, and was made a Member of the Order of Australia in 2006. He died in 2013 in Bowral in the NSW Southern Highlands, where he had moved in 2002.

Herbert Flugelman’s archive is held in the Art Gallery of NSW’s National Art Archive. In an interview in 2010, conducted for the archive, he commented on his creative process:

I follow my nose. I go where it leads me. One thing suggests the next and then I run with it until something else pops up… The main thing is not to stop.

Other works by Herbert Flugelman