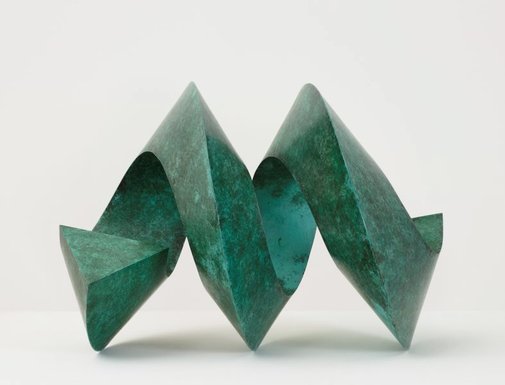 From the late 1960s Bert Flugelman became known as one of the leaders of a new wave of sculpture practices that ranged from object-based to installation, conceptual and performance artworks. He established from this time an enduring interest in creating works that were linked to their broader environment and for this reason he perhaps remains best-known as the sculptor of many public monuments that can be seen across Australia. Throughout the 1970s, his works played an important role in establishing a contemporary abstract sculptural language that subverted the figurative stronghold on public sculpture commissions. By this time, Flugelman had developed a sculptural aesthetic that combined severe geometry with a feel for optical theatricality as well as movement in static form.

'Double spiral' forms part of a series of the sculptor's late works that visualises the 'spiral of Nature' - the patterns of natural growth that formed an enduring theme of 20th century sculpture. Like works of preceding decades, Flugelman has employed in 'Double spiral' clear, continuous surfaces to propel the notion of organic rhythms and implying a sense of the infinite. Although the severity of his earlier sculptural geometry is here relaxed, the artist maintained a strong mathematical order as the basis for an abstraction that expresses a sense of velocity and appears as a gesture of perpetual motion. 'Double spiral' is indicative of Flugelman's ability to create a sense of complexity within the guise of simple object form as well as his attention to developing an abstract sculptural language based on engaging forms. 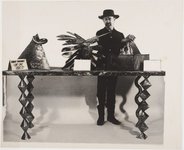