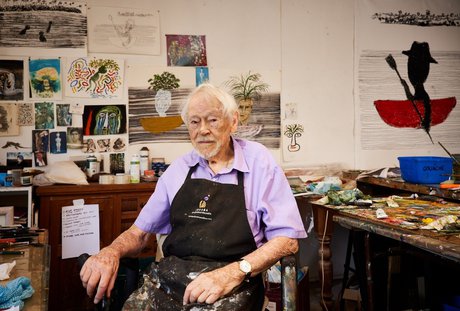 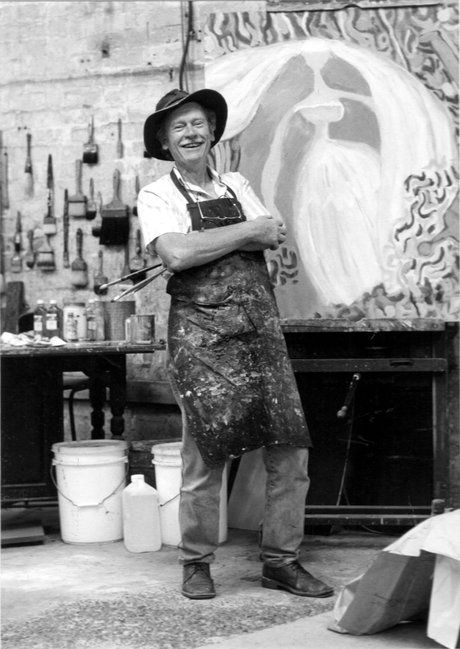 Guy Warren’s work is inspired by personal experiences and memories of places visited in the recent and distant past and is part of the abstract expressionist tradition developed in Sydney in the 1950s and 60s among artists such as John Olsen and Tony Tuckson.

Born in Goulburn, NSW in 1921, Warren left school in 1935 then started work as an assistant proofreader on The Bulletin in Sydney. He was interested in drawing and pestered the magazine’s art editor John Frith, who brought him to the art school of JS Watkins.

Warren served with the Australian army in New Guinea during the Second World War and subsequently studied at East Sydney Technical College (now the National Art School) under the Commonwealth Rehabilitation Training Scheme, established to assist returned servicemen, alongside artists including Tuckson and Bert Flugelman. His war-time experiences with the people and jungles of New Guinea became fodder for recurring imagery in his work.

Travelling to London in 1951 with his wife Joy, Warren undertook further training at the London School of Art and Central School of Arts and Crafts and spent eight years there before returning to Australia.

In the 1970s he purchased 50 acres of land at Jamberoo, on the South Coast of NSW, and built a shack from local timber. He has visited there regularly over the past five decades, absorbing the rainforest landscape which provides an ongoing source of personal energy and inspiration for his work.

Warren has said: ‘My paintings frequently shift between the figurative and the abstract as they experiment with the placement of figures in a landscape. My themes are mythology and the metaphors we construct… to make sense of man in nature – and, equally, the presence of nature in man.’

Estuary in winter, Shoalhaven was a finalist in the Wynne Prize 1963. Its green and brown palette and abstracted plant forms vividly evoke the wintry, watery tidal mouth of the river. A canoeing trip Warren took as a teenager down the Shoalhaven River proved an exhausting but thrilling experience and he has returned to the imagery of the Shoalhaven, boats and boatmen throughout his long career.

Warren won the Archibald Prize in 1985 with a portrait of Flugelman and has been a finalist in the Sulman, Wynne and Dobell Prizes several times. He was awarded the Wynne’s Trustees’ Watercolour Prize in 1979. He received the Medal of the Order of Australia (OAM) in 1999 and the Australia Medal (AM) in 2013.

Other works by Guy Warren