The geography of South, Southeast and East Asia ranges from tropical jungles to frozen peaks, from lush pastures to arid deserts. The cultures, languages and ideologies of this vast region, now home to over half the world’s population, are just as diverse.

The cultures of Asia still maintain distinct characteristics that took centuries to evolve. Influences and ideas from other sources have been accepted, absorbed, altered, sometimes rejected, creating families of cultures which, while related, are richly distinctive.

As in the West, religious beliefs have inspired an abundance of imagery that uplifts and comforts. Faiths such as Hinduism, Buddhism and Islam have spread through Asia, inspiring individual expressions of prescribed imagery. Buddhist texts, for example, state what the relative proportions of a Buddha figure should be, yet each figure is different – a Chinese Buddha would not be confused with a Thai Buddha. The patronage and preferences of monks, courts and devotees has resulted in breathtaking, yet stylistically different, temples, sculptures and ritual objects across Asia.

Text has shaped the arts of Asia. Although lost in mainstream Western traditions, the art of writing – calligraphy – is still cherished. Different scripts, from ancient Sanskrit to contemporary ‘Chinlish’, have been valued for their aesthetic expression as well as their content, and are synonymous with specific cultures.

Respect for craft, skill or artisanship has been maintained in different Asian cultures. The range of media used across Asia is immense, and many have long artistic traditions behind them. Certain materials tend to associated with the art of specific countries because – again, often through patronage – extraordinary heights of artistry and innovation were realised: think of stone for India; jade and porcelain for China; lacquer for Japan; textiles for Indonesia.

Textiles are a medium in which Asia has excelled, with a long history of exporting to the West. Through textiles, as with all media, there are clearly different tastes and preferences: the lavish brocades of Mughal emperors, the ikats of Indonesia, the silks of Chinese elites, the export cottons of India.

In the West, artistic values have been shaped by the Renaissance, which put fine art – painting, sculpture and architecture – above others, such as decorative art and design. In Asian cultures such hierarchies are irrelevant, which is one reason Asian galleries in museums display objects of many kinds in many media. In traditional China, the principle of qi, or spirit resonance, has determined the artistic merit of landscape painting, while in Japan the aesthetics of tea masters has created a permanent legacy, and in India the theory of rasa, flavour, has been a measure of artistic merit.

While, from the 1800s, young Asian artists had experimented with Western artistic conventions, they are now turning back to their own traditions and combining elements of East and West – a clear expression of the gradual shift to a world culture.

We plan to build on this introduction to explore key themes in Asian art.

Send us your suggestions 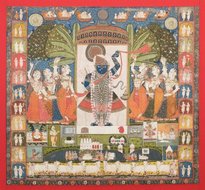