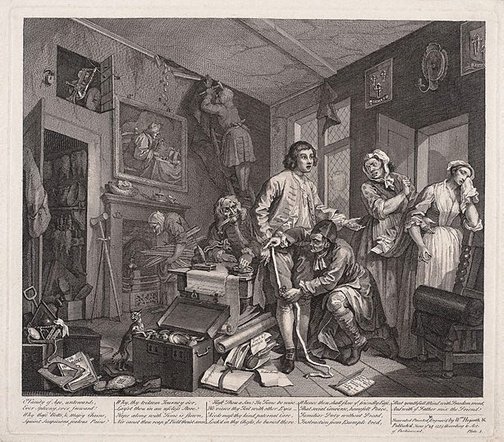 Hogarth was the first major British artist, equally famous in his day as a painter, engraver and polemicist, championing the cause of British artists and attacking foreign (French) influences and styles. He was, above all, a Londoner, who captured the vitality and swirling crowds of the metropolis like no artist before him. Covent Garden, Leicester Square, St Martin’s Lane, Charing Cross, The Strand: these neighbourhoods – at once polite and glittering, crude and filthy – were Hogarth’s daily stomping grounds and his source of inspiration. His work provides a vigorous picture of early Georgian London comparable in its extent and detail to Charles Dickens’s panorama of that city in the Victorian age.

Hogarth had an extraordinary gift for narrative invention. He developed the storytelling aspect of printed pictures to heights seldom reached before or since, so that all the implications of the drama are apparent to the spectator. Each face, each pose, each movement, each interaction solicits our attention and drives the story forward, elaborating a moral narrative of past, present and future. In this respect, his art has much in common with the emerging English novel, which was also attempting to tell an affecting human story, woven through with exuberant scenes of roguery, escapade and robust humour.

After a few years of painting portraits and conversation pieces, which failed to bring in sufficient cash, Hogarth decided, as he recounts in his Autobiographical notes, to ‘turn my thoughts to a still more new way of proceeding, viz. painting and Engraving modern moral subject[s] a field unbroken up in any Country or any age’. These modern moral subjects, beginning with A harlot’s progress in six scenes in 1732, were a new form of art created by Hogarth and regarded as his most important achievement.

In the preface to his novel Joseph Andrews (1742), Hogarth’s great friend and ally Henry Fielding called Hogarth ‘a comic history painter’ whose art consists in the ‘exactest copying of nature’. Fielding was endeavouring to explain the differences between his own prose experiments and crude burlesque by means of analogy with Hogarth’s engraved narratives and their difference from the distortions of mere caricature. ‘Comic’ and ‘moral’ are fitting adjectives to describe Hogarth’s scenes of contemporary London life, for his indictment of folly and vice was done with satire – combined with an unforgettable sense of mischief and humour – rather than by dryly preaching virtue.

By mid 1734 Hogarth had completed eight paintings illustrating A rake’s progress, now in Sir John Soane’s Museum, London. The engravings were published in June 1735, immediately after the passing in parliament of the Copyright Act (also known as Hogarth’s Act), which protected the prints from piracies. Hogarth had been so angered by the cheap copies that appeared on the market soon after the publication of his last series, which undercut his sales, that he led the campaign to protect himself and other engravers from such malpractice.

A rake’s progress was envisaged by Hogarth as an exploration of the fashionable world in contrast to the sordid life of the harlot. The word ‘progress’ in the title would immediately have brought to mind the familiar pilgrim’s progress – an allegory of the Christian journey from sin through salvation to eternal happiness. But Hogarth’s ‘progress’ is, ironically, a tale of retrogression leading to despair and damnation. It tells the basic story of a middle-class boy, Tom Rakewell, who is led astray by the temptations of good fortune and the aspiration to assume the hedonistic lifestyle of an aristocratic rake. Progressively he squanders his inheritance and slides into poverty and madness. The verses along the bottom of each plate – commissioned from Hogarth’s friend John Hoadly – offer moral reflections on the hero’s gradual path to ruin and disaster.