(Yoshitsune in the mountains), from the series The vicissitudes of the Minamoto and Taira clans 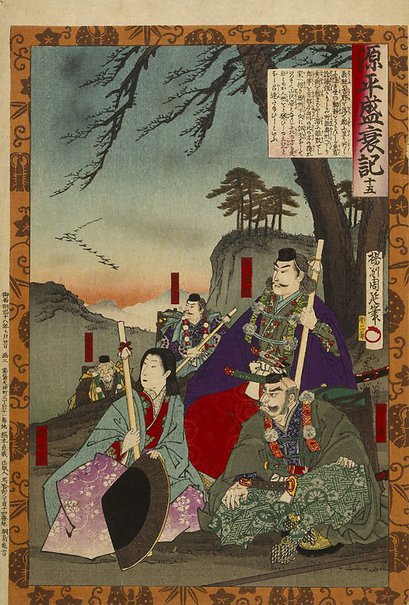 Produced in the mid to late 19th century, the period often referred to as the 'decadent' period of ukiyo-e, the subject matter reflects the feeling of unrest in Japan when the Shogunate Government was losing its grip on the rising powers of merchants & progressive regions. The subtlety of the pleasure seeking 'floating world' of earlier times gave way to depictions of emotional drama or violence taken from historical battles, stories of heroic deeds & the kabuki theatre.

Text inscription in work reads: 'Yoshitsune left Yoshino and hid in the Capital to track the enemy movements. Perceiving danger, he decided to go to the north and seek protection the of (Fujiwara) Hidehira, and gathered his men in his wife's hideaway in Imagawa, Kyoto. Having agreed on the plan, the party disguised themselves as mountain monks. Yoshitsune's wife insisted on following him, so he took her and his baby with him.'