Scene on the Sumida River 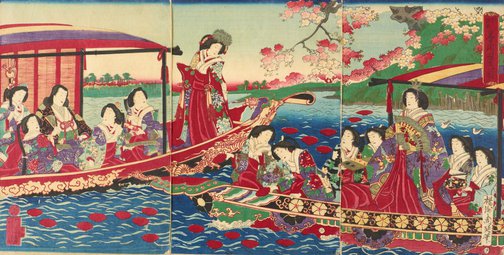 This print portrays the popular genre in Japanese prints of women’s pastimes. The game being played is known as 'Kyokusui no utage' or ‘winding stream party’ and is said to have first been played by the nobility during the Heian period (794-1185). It combined the drinking of sake and the writing of waka (31 syllable poetry). Light lacquerware cups would be filled with sake and floated on water. In the time it took for the cup to float down the stream, a waka poem would have to be written. Once the cup arrived, writing would cease and a drink taken. Mentioned in 'The Pillow Book' by Sei Shōnagon completed in 1002, the game was portrayed as a pleasurable pastime. In this work boatloads of beauties in Heian style attire play the game along the river during cherry blossom season.