(Death of Atsumori), from the series The vicissitudes of the Minamoto and Taira clans 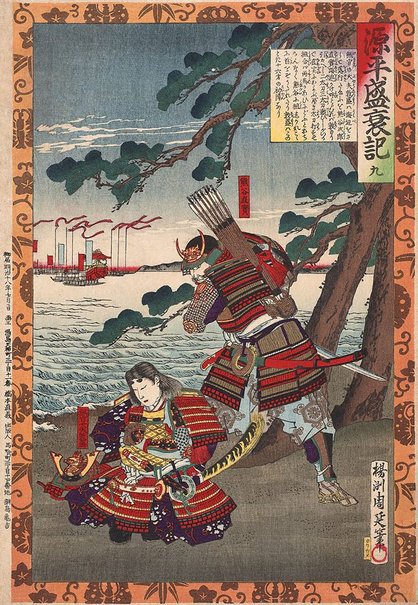 Produced in the mid to late 19th century, the period often referred to as the 'decadent' period of ukiyo-e; the subject matter reflects the feeling of unrest in Japan when the Shogunate Government was losing its grip on the rising powers of merchants & progressive regions. The subtlety of the pleasure seeking 'floating world' of earlier times gave way to depictions of emotional drama or violence taken from historical battles, stories of heroic deeds & the kabuki theatre.

Atsumori was a fifteen-year-old general of the Taira clan. During the battle of Ichinotani in 1184, he was captured by Kumagai Naozane, a Minamoto warrior. Struck by Atsumori's youth, courage and elegant appearance, Naozane hesitated in killing his captive. However, as the Minamoto army drew closer, he had no choice but to behead him. Searching the dead body Naozane found a flute which had been given to the youth by the Emperor in recognition of his musical talent. After the battle, Naozane became a priest and devoted his life to praying for Atsumori's soul. This story became one of the most popular Noh plays.

Text inscription in work reads: 'When Atsumori, the fifth-rank officer without title, was retreating towards offshore, Kumagai Jirô Naozane called out to him to come back and fight. Atsumori turned his horse back to the shore. They crossed swords and in the close battle the horses clashed and Atsumori fell. He was easily killed and his head cut off by Kumagai. This was Atsumori's first battle at the age of sixteen.'