(Loyal retainer Tadanobu), from the series The vicissitudes of the Minamoto and Taira clans 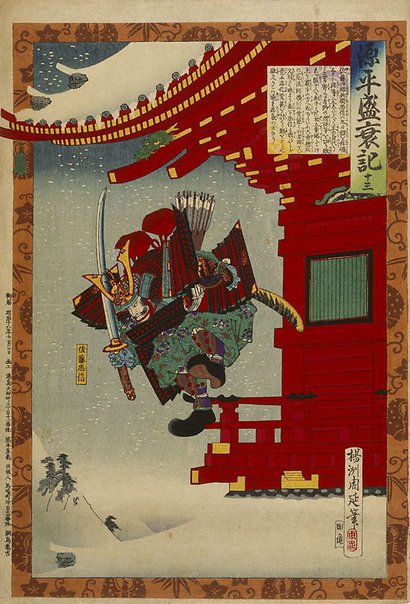 Produced in the mid to late 19th century, the period often referred to as the 'decadent' period of ukiyo-e; the subject matter reflect the feeling of unrest in Japan when the Shogunate Government was losing its grip on the rising powers of merchants & progressive regions. The subtlety of the pleasure seeking 'floating world' of earlier times gave way to depictions of emotional drama or violence taken from historical battles, stories of heroic deeds & the kabuki theatre.

Text inscription in work: 'Satô Shirô Hyôe Tadanobu put on (his master Yoshitsune's) sword and armour, and took on the scores of approaching temple soldiers of Yoshino. He ran up the five-story pagoda and jumped off at the back of the pagoda. One Rokusen of Yokokawa, a soldier monk reknowned for his strength, also jumped off and chased him. Tadanobu fought Rokusen, killed him, then followed his master to the Capital.'