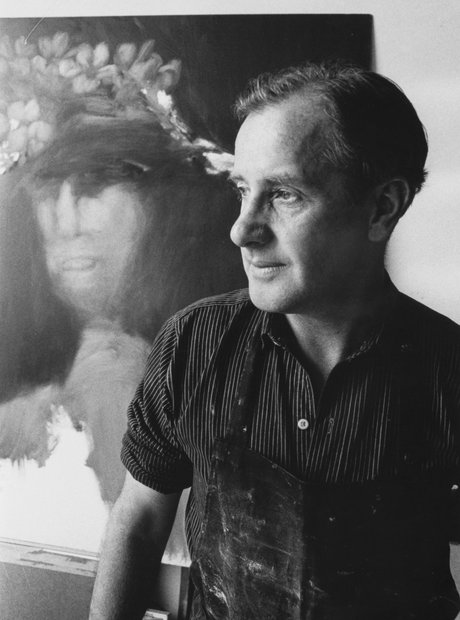 Portrait of Sidney Nolan, 1964, by Axel Poignant, in front of a Nolan painting that featured on the cover of Patrick White’s novel Riders in the chariot © Roslyn Poignant. Source: National Portrait Gallery, Canberra, 2003.126 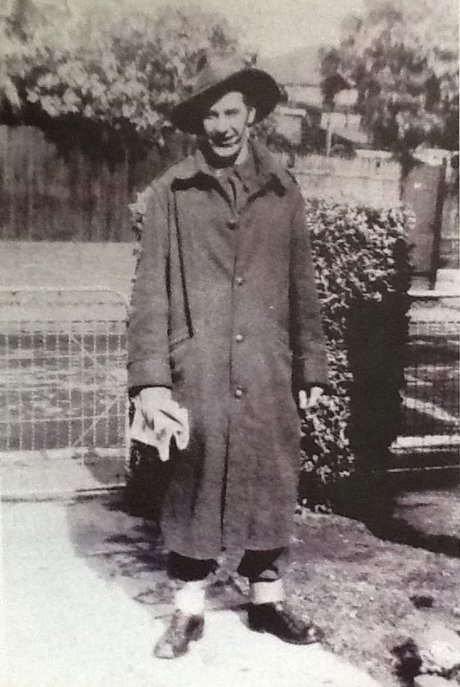 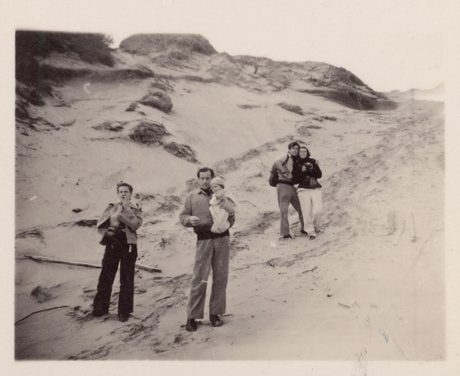 Sir Sidney Nolan was one of Australia’s most significant modernist artists, best known for his depictions of the history and mythology of bush life in Australia. His paintings, often rich in colour, striking in composition and deliberately awkward in technique, represent Australian stories of loss, failure and capture, featuring figures such as the bushranging Kelly Gang, shipwreck victim Eliza Fraser and the explorers Burke and Wills. Nolan’s iconic paintings of the Kelly Gang contributed to the development of the image of Ned Kelly as a symbol for Australian history and identity.

Nolan studied at the National Gallery of Victoria’s School of Art in 1934 and 1936 but educated himself primarily through books on Pablo Picasso, Paul Klee, Henri Matisse and the surrealists. From 1938 he was encouraged and supported by art patrons Sunday and John Reed. Their house, ‘Heide’, in the outer Melbourne suburb of Heidelberg (now Heide Museum of Modern Art), was a meeting place for the avant-garde group known as the Angry Penguins, named after the radical cultural journal. The group included the artists Albert Tucker, Joy Hester, John Perceval and Arthur Boyd. The Angry Penguins sought to modernise Australian art and poetry by adopting spontaneous and visionary processes influenced by surrealism.

In 1940 Nolan held his first solo exhibition in Melbourne, designed sets and costumes for the Ballets Russes production of Icare, and became a founding member of the Contemporary Art Society. Conscripted into the army in 1942, he spent two years in northwestern Victoria, where he painted the local landscape and figures in a powerfully simplified style of intense colour and bold brushwork Dimboola 1942. Deserting the army in 1944, Nolan lived under the assumed name of Robert Murray, and the following year began his iconic series of the bushranger Ned Kelly that portrayed events leading to the much-mythologised outlaw’s demise. In these paintings, Kelly is represented by the forms of his solid black armour. It was Nolan’s most inventive pictorial device, which he superimposes against the Australian landscape in First class marksman 1946 to suggest how stories and myths shape our meanings of place.

Leaving Melbourne in 1947 Nolan trekked across far north Queensland and Fraser Island (Fraser Island 1947) and painted a second historical series on the shipwreck victim Mrs Eliza Fraser. He visited the ravaged landscape of a Mt Isa mine in 1948, painting Pretty Polly Mine. He then travelled to central Australia, where he developed a deep interest in the ill-fated Australian explorers Burke and Wills, who died attempting to cross Australia from south to north, and depicted them in Burke and Wills expedition, ‘Gray sick’ 1949.

In 1948, Kenneth Clark, Slade Professor at Oxford, was visiting Australia and urged Nolan to travel in Europe. Nolan left for London in 1951 and spent extended periods in Greece and the USA. He continued to work on his early subject matter throughout his career, returning almost obsessively to the Kelly Gang, Eliza Fraser and Burke and Wills, for example in Burke 1962. He also worked often as a designer for theatre and opera productions, including Samon et Dalila and The abduction from the Seraglio in 1987 at Covent Garden, London and Il trovatore for the Australian Opera in 1983. Nolan was knighted in 1981 and made an associate member of the Royal Academy of Arts (UK) in 1987 and a companion of the Order of Australia in 1988.

Other works by Sidney Nolan