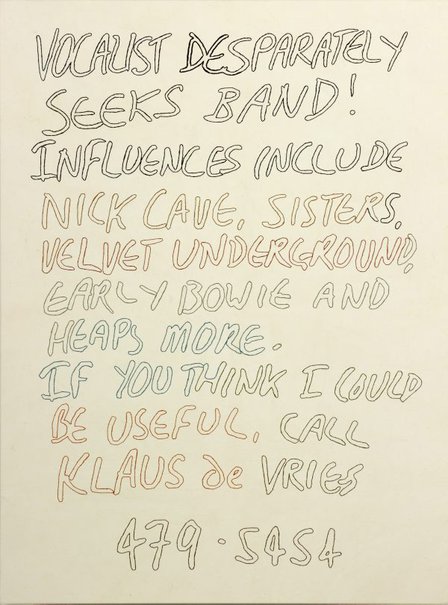 Melbourne-based artist Ronnie van Hout was born in Christchurch in 1962. He attended the School of Fine Arts at Canterbury University between 1980 and 1982, where he majored in film. Since the early 1980s van Hout has exhibited regularly in New Zealand and Australia, and has been included in several group shows in the USA and Europe. Encompassing sculpture, painting, photography, video and embroidery, the work of van Hout offers a wonderfully macabre exploration of the self. It is at once shamelessly personal, often incorporating images and documents relating to the artist, and universally affective, using a dark twisted wit to bring the absurdity of our existence into keen focus.

In this work we see a canvas embroidered with text from an old noticeboard ad that van Hout used to collect from music stores. Opening with the line ‘Vocalist desperately seeks band!’, it is part of a group of embroidered works – the artist’s first in such medium – made at a time when van Hout was moving away from photography and looking to handwritten notes, personal documents and other found materials that, in his words, “showed some evidence of my existence”. Mixing the traditionally feminine pastime of needlework with the testosterone-fuelled dreams of rock n roll stardom, the work explores the ways we fabricate and project an aspirational version of ourselves. In particular, it reveals the deep, sometimes misguided, hope that lies at the frontline of the pursuit of dreams -- and indeed, of being an artist.

Gift of Richard Moss 2016. Member of the Friends of New Zealand Art