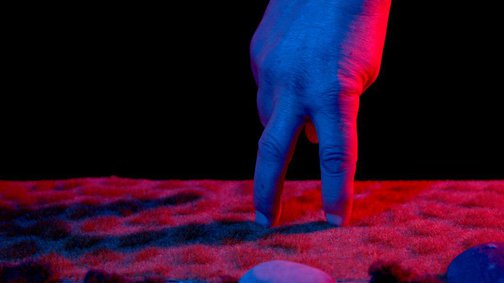 Encompassing sculpture, installation, photography, video and more, New Zealand born and Melbourne based artist Ronnie van Hout’s work treads the line between humour and the macabre. Throughout his career van Hout has pursued warped renditions of the self-portrait genre, using his own body as both subject and material. In his work, the body often becomes fragmented, disfigured and alien – yet never relinquishes its comedic inflection. An uncanny proxy, van Hout’s body is both a site of and prop within absurdist narratives leaden with metaphoric entanglements and black humour.

In the short video piece 'Handwalk', a personified hand (the artist’s own) traverses a surreal and placeless landscape. The slightly undulating terrain, covered in what appears to be AstroTurf, is bathed in a light that shifts from red to purple. The scene unfolds as a micro-narrative of abjection and loneliness. The hand wanders aimlessly back and forth across the frame before it eventually encounters a friend. Curious, the two hands – a united pair – touch one another tentatively at first and then begin to dance. The protagonist suddenly interrupts the dance and wanders out of the frame. When the protagonist returns, the partner has disappeared.

Injecting the subtleties of human interaction into the fragmentary movements of a disembodied limb, van Hout displays an astute emotional dexterity. Powerful sensations of connection, abandonment and loss are palpable in the work and are amplified by the video’s ambient soundtrack that features music by New Zealand noise / drone band The Dead C.