'Wisps of cloud' with accompanying calligraphy (Chapter 19), episode from the 'Tale of Genji' 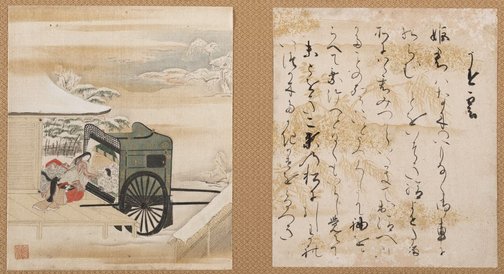 In Chapter 19 of the 'Tale of Genji' entitled 'Usugumo', Genji decided that his daughter by the Akashi lady should be brought up at court with all the advantages his position and wealth could provide. This album leaf depicts the parting scene between the Akashi lady and the young girl, who is about to leave their humble abode in the countryside for the capital in a gorgeous cart. The painter has chosen to place the scene in deep winter to enhance the tragic atmosphere of the departure. Raising the sleeve of her kimono to hide her face, the lady is shown in a moment of deep grief, while the little girl clings desperately to her mother. Sitting in the back of the cart and hidden by the half-lowered bamboo curtain is Genji, who came to take his daughter. Seen from the back on the veranda is a maid carrying a tray with the toys and other personal belongings of the girl. The scene is jewel-like in its miniaturistic detail, a signature of Tosa-school narrative painting, in which tradition Gukei was trained. The faces are delicately outlined, with the utmost care and a high sense for decorativeness applied to the intricate textile patterns.

Accompanying the picture is an album leaf of the same size with seven lines of text and the chapter title, 'Usugumo' (Wisps of cloud), on the right. The sheets were originally pasted into an album, facing each other, with the text on the right and the picture on the left.

Trained in the courtly tradition of the Tosa-school, Gukei was called to Edo to serve the Tokugawa Shoguns as official painter, working on the large commission of a pictorial history of the Toshogu shrine, where the founder of the Tokugawa shogunate, Ieyasu, is buried and worshipped. Along with the Tosa-school in Kyoto, the Sumiyoshi lineage is considered the most important exponent of the indigenous 'yamato-e' tradition.

Chapter Usugumo from the Tale of Genji with accompanying poem

Sumiyoshi Gukei
'Wisps of cloud' with accompanying calligraphy (Chapter 19), episode from the 'Tale of Genji'