'The pink' with accompanying calligraphy (Chapter 26), episode from the 'Tale of Genji' 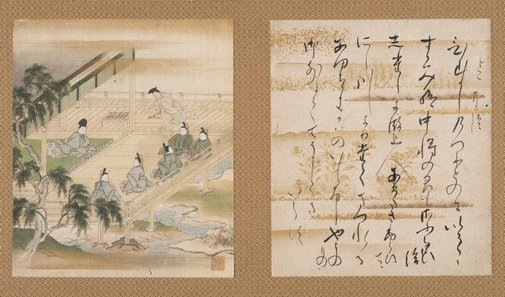 'Tokonatsu' (The Pink) is the 26th chapter in the “Tale of Genji”. Although the title of this chapter refers to the pink or wild carnation flowers that grew in the summer garden of Genji’s adoptive daughter Tamakazura, to whom Genji felt very much attracted, the classical iconography for this chapter shows the banquet scene in Genji’s fishing pavilion in the southeast quarter of his Rokujō mansion. Genji is depicted sitting on a raised tatami mat. Keeping him company is his son Yūgiri and several of his friends, among them also the sons of Genji’s friend and rival Tō no Chūjō. On the right veranda, a cook is preparing trout for an afternoon meal. After the banquet, the party headed to Tamakazura’s quarter which featured a summer garden to admire the beauty of the wild carnations (‘Tokonatsu’, literally ‘everlasting Summer’) and to ponder the beauty of the girl dwelling in this garden.

The scenes are jewel-like in their miniaturistic detail, a signature of Tosa-school narrative painting, in which tradition Gukei was trained. The faces are delicately outlined, with the utmost care and a high sense for decorativeness applied to the intricate textile patterns. Characteristic for Gukei is the wonderful translucency of his colour palette, which imbues the paintings with a soft, dreamy atmosphere.

Accompanying this picture is an album leaf of the same size which bears the chapter title and a prose excerpt, written in an elegant cursive script. The square 'shikishi' sheets were originally pasted into an album, facing each other, with the text on the right and the picture on the left.

Trained in the courtly tradition of the Tosa-school, Gukei was called to Edo to serve the Tokugawa Shoguns as official painter working on the large commission of a pictorial history of the Toshogu shrine where the founder of the Tokugawa Shogunate, Ieyasu, is buried and worshipped. Along with the Tosa-school in Kyoto, the Sumiyoshi lineage is considered the most important exponent of the indigenous 'Yamato-e' tradition.

Chapter 'Tokonatsu' from the Tale of Genji with accompanying calligraphy

Sumiyoshi Gukei
'The pink' with accompanying calligraphy (Chapter 26), episode from the 'Tale of Genji'