Chapter 'Asagao' from 'The Tale of Genji' with accompanying calligraphy 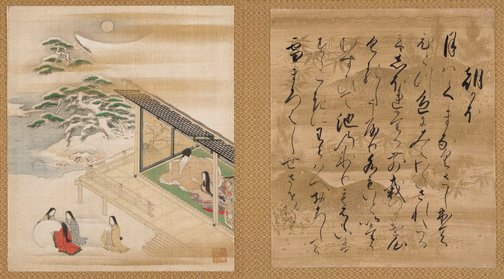 Along with the Tosa-school in Kyoto, the Sumiyoshi lineage is considered the most important exponent of the indigenous Yamato-e tradition. The son of Sumiyoshi Jōkei (1561-1633), Gukei followed his father from Kyoto to Edo in the 17th century to work as an official painter for the Tokugawa Shogunate. In 1682, Gukei was appointed ‘painter-in-attendance’ ('oku eshi') to Shogun Tokugawa Tsunayoshi. This high rank secured the future of the Sumiyoshi lineage. Later, he was awarded the honorary title of 'hōgen' (‘Eye of the Dharma’).

The album leaf ‘Asagao’ and the accompanying calligraphy belongs to a set of 54 images (and 54 calligraphy), illustrating the 54 chapters of the 11th century literary masterwork 'The Tale of Genji'. Gukei’s illustration follows the traditional iconography for this chapter (Chapter 20 in the tale), showing Prince Genji’s attempt to cheer up Murasaki by ordering colourfully dressed page girls to shape snow balls in a wintry garden.