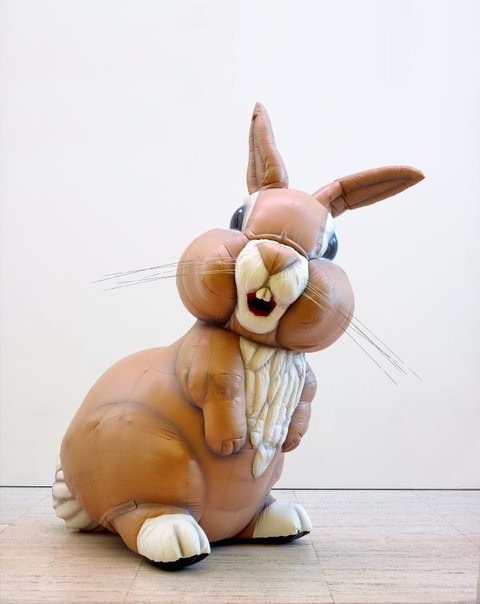 In 2002, two hypothetical sculptures by Michael Parekowhai stirred up a major debate.

Invited to create a work for the three-month-long ‘2002 Scape: Art and Industry Urban Arts Biennial’ in the South Island city of Christchurch in New Zealand, Michael Parekowhai proposed to populate the city’s central urban space, Cathedral Square, with two colossal fibreglass rabbits. Called Cosmo and Jim McMurtry, the sculptures suggested a cross between the cute creatures of Disney cartoons and the car-crushing monsters of science fiction. In Parekowhai’s working drawings, Cosmo looked across in fright at Jim, who sprawled nearby as if shot down by a hunter.

Despite broad support and independent funding, Parekowhai’s proposal was itself shot down. Vocal opposition slowed the consent process, and the sculptures never made it to Cathedral Square.

Rabbits, however, are famously hard to keep down. In the past three years, Cosmo and Jim have multiplied and travelled as far afield as Korea and Lithuania. In 2004, a large inflatable version of ‘Jim McMurtry’ met visitors to the Gwangju Biennale in Korea, sprawled across a plaza with lolling tongue and limp whiskers. In 2006 Jim travelled to Vilnius in Europe, where he was the centrepiece of ‘High Tide: New Currents in Art from Australia and New Zealand’. Meanwhile, the large version of Cosmo towered over crowds in the grand centre court of the Royal Melbourne Exhibition Building at the 2006 Melbourne Art Fair, and went from there to the permanent collection of the National Gallery of Victoria.

From Brer Rabbit of the American South through to Warner Bros’ Bugs Bunny, rabbits often appear in folklore and popular culture as ‘trickster’ figures – characters that dodge trouble, lie artfully, mock authority, and generally refuse to stay put within fixed categories. The significance of rabbits was hotly discussed during the Christchurch debates in 2002: Were they friendly, feel-good presences? Or symbols of an invasive settler culture gone feral? Whatever the answer, it’s not hard to see their appeal to Parekowhai, an artist known for addressing matters of race and colonisation while moving nimbly between sculptural registers. ‘Cosmo McMurtry’ is an apt mascot for a body of work characterised by quick wit and a strong sense of mischief.