Passchendaele, from the series The consolation of philosophy 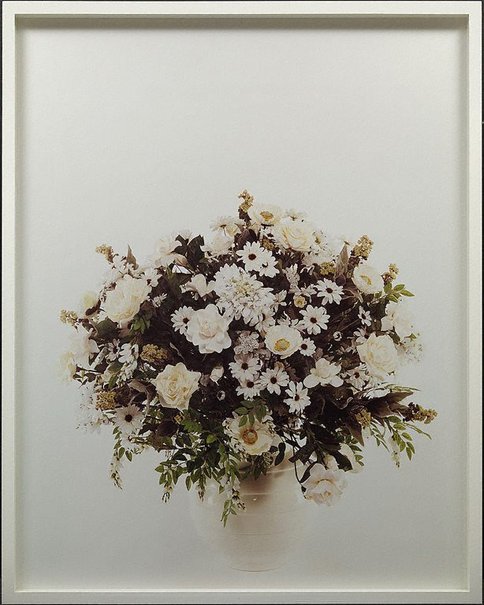 Michael Parekowhai was born and educated in New Zealand. He has been exhibiting since 1990. In 2006 his work was included in the Asia-Pacific Triennial of Contemporary Art, Brisbane; ‘High tide: currents in contemporary New Zealand and Australian art’, Poland and Lithuania; and ‘Picturing Eden’, George Eastman House, Rochester, New York.

Parekowhai is chiefly known for his installations, but his work with photography – where he constructs the objects, photographs and frames them – is entirely logical within his practice; that is, the process is not dissimilar. ‘The consolation of philosophy’ is a series of 12 framed photographs of funerary flower arrangements constructed by the artist. The vessels are larger than life-size models of Keith Murray vases.1 Each work is named after a region in France or Belgium where the New Zealand Maori Battalion fought in the First World War. These regions are also highly evocative for an Australian audience. The work comments on nationhood and colonisation, memorialisation and tribute. In 2002 Parekowhai wrote:
the use of flower symbolism in this work memorialises much more than just the war exploits of our glorious dead. It is also about reclaiming a pre-Pakeha Maori appreciation of the floral as an authentic badge of masculinity. Our family name ‘Pare-kowhai’ literally means ‘garland of yellow’ (kowhai of course) and was won for us by a great warrior, who was as much a conqueror in the field of love, as he was a conqueror in the field of war. In this work the ability to express a sensitivity to, and a respect for ‘flowers’, is seen as a staunch affirmation of manliness made only by true sons and grandsons of ‘real’ men.2

1. Keith Murray was a New Zealand designer of ceramics for Wedgwood UK in the 1930s. His designs remained popular until the 1960s and still inspire a sense of nostalgia in New Zealand where they were admired and copied locally
2. 2006, ‘Catalogue: John Leech Gallery & Gow Langsford Gallery’, Auckland p 68