Turk Lane, from the series The consolation of philosophy 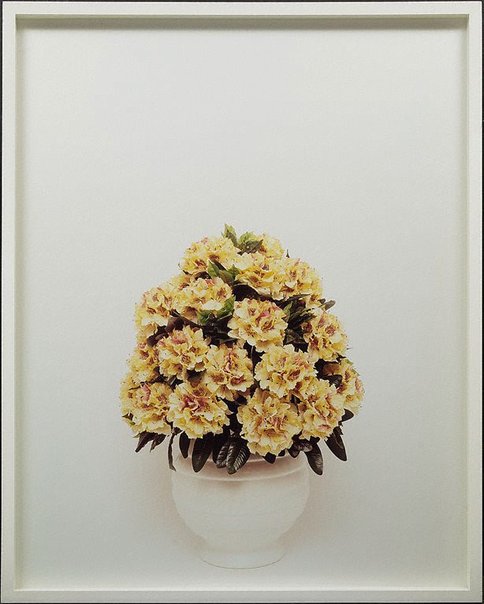 Michael Parekowhai has worked on three photographic series over the last two years. Parekowhai is chiefly known for his installations but his move into photographic series, where he constructs the objects, photographs and frames them, is entirely logical within his practice, that is, the process is not dissimilar.

Parekowhai was born in New Zealand in 1968 and has exhibited in the last two years at The Andy Warhol Museum, USA, the 3rd Asia-Pacific Triennial, Brisbane, 'Bright Paradise', Auckland Art Gallery, Noumea Biennial, and 'Flight Patterns' at the Museum of Contemporary Art, L.A. He also exhibits extensively in New Zealand and is participating in the 2002 Biennale of Sydney.

'The consolation of philosophy' 2001 is a series of 12 framed photographs of funerary flower arrangements constructed by the artist. The vessels are larger than life size models of Keith Murray vases. Each work is named after a region in France or Belgium where the New Zealand Maori Battalion fought in World War I. These regions are highly evocative for an Australian audience too - Ypres, Passchendaele and so on. The work comments on nationhood and colonisation, memorialisation and tribute. The work therefore parallels that by Yasumasa Mormura which is in the collection of the Gallery, and works by Australian artists such as Tracey Moffatt - who are concerned to analyse and reinterpret the past and the present through photography.