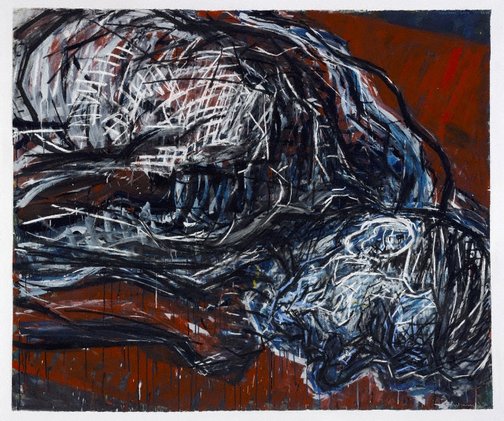 David Fairbairn was born in Zambia in 1949 and studied art in England between 1969 and 1977 at Wimbledon and Central School of Art and Design, the West Surrey College of Art and Design and the Royal Academy Schools, London. He has travelled extensively throughout Europe, Africa and the USA, and settled in Australia in 1981. Fairbairn has exhibited his work in group and solo exhibitions since 1974 and has won numerous art prizes, including the Doug Moran National Portrait Prize in 2002, and has been a regular finalist in Dobell Prize exhibitions since 1996.

A survey exhibition and accompanying publication – Lineage: David Fairbairn selected portraits 1998–2010 – was organised by Campbelltown Arts Centre in 2011 and toured regional New South Wales until early 2012 – this drawing was included in that exhibition. Fairbairn lives and works at Wedderburn in south-west Sydney.

‘Large head C.S. No. 1’ is from a large series of drawings made in 2006/7. The subject of the drawing was Clive Standbridge; '....originally a psychiatric nurse at Gladesville Hospital, whose subsequent life was difficult ... who ended up working as a life model at the National Art School. He proved to be an extraordinary model (my favourite!) & had quite an aura about him which ultimately compelled me to work with him. Unfortunately during the two years he worked with me he developed inoperable pancreatic cancer but insisted on working with me to the end (June 2007). That particular pose in ‘Large head C.S. No. 1’ .... was the result of Clive being unable to sit up during the sessions owing to the extreme pain he was in. Many of the works ended up being about the process of dying & the journey we both took together through the weekly ritual of the drawing sessions' (email from artist to Art Gallery of New South Wales 22.09.2012).

This work was a finalist in the 2008 Dobell Prize and was acquired by the Gallery in 2012.

Gift of the artist, donated through the Australian Government’s Cultural Gifts Program 2012

Browse other works by David Fairbairn