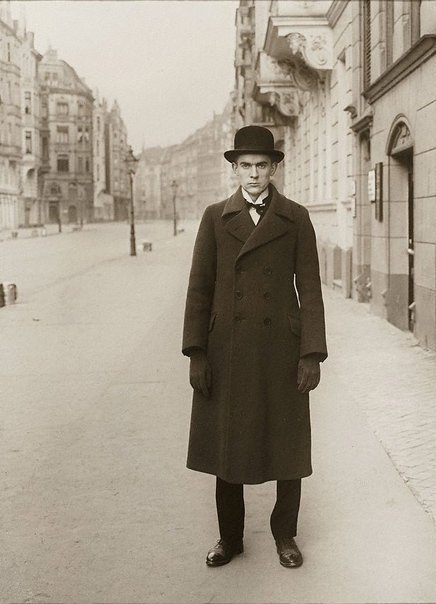 August Sander is best known for his monumental project ‘People of the Twentieth Century’ which aimed to document the German society in which he lived.

During the early 1920s Sander became involved with the Cologne Progressive group, conceiving of a major portrait project intended to objectively reflect contemporary society. This he envisaged would comprise of some 45 folios, each divided into seven categories, with twelve photographs per folio. His first folio began with the category of The Farmer. The diverse range of individuals he documented were photographed and presented as ‘archetypes’ of their profession or social position; collectively they provide a dignified and individuated glimpse of humanity.

Sander published a preview of this series, entitled ‘Face of the Age’, in 1929. It was enthusiastically received at the time, but was later condemned by the Nazis who objected to the social diversity it presented.
Under the increasing threat of persecution Sander turned the focus of his work to nature and landscape photography throughout the 1930s and 40s.

The painter Anton Raederscheidt studied in Cologne and Dusseldorf and from 1914 was associated with the avant-garde. Married to the artist Marta Hegemann, another of Sander’s subjects, they came into contact with the photographer as part of the Cologne progressives group whom Sander documented in the 1920s. Raederscheidt is photographed early in the morning on Bismarkstrasse in Cologne looking very much like a figure from one of his own paintings. Raederscheidt fled Germany in the mid 1930s, survived the war and eventually returned to Cologne where he died in 1970.