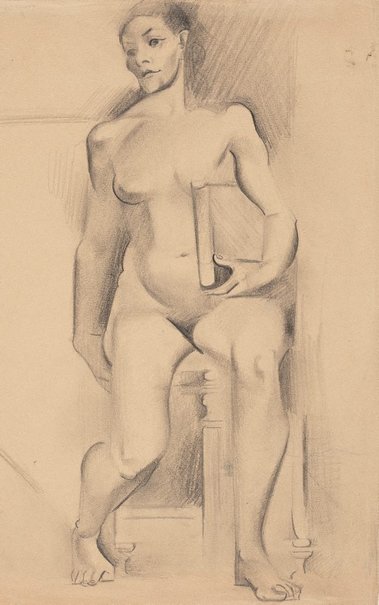 'We were united in the one belief, the constructive approach to painting, and this insistence of the abstract elements in building a design was the keynote of teaching with both Lhote and Gleizes ... Although the model was used in the class, the student was discouraged from making merely a faithful record of a nude, a draped figure or a portrait. The abstract elements in line, shape and colour were introduced in order to induce the student to construct from it a design within a given space.'

This drawing was made during the artist's time in Paris, where she studied under André Lhote a leading teacher of the Cubist movement. Her strongly delineated contours and volumetric modelling of the body accords with Lhote's emphasis on the simplification of forms into basic geometry. The drawing also reveals Crowley's strong grasp of anatomy, acquired through earlier academic training at Julian Ashton's Sydney Art School.

Browse other works by Grace Crowley