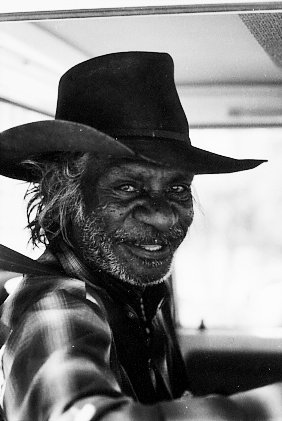 Rusty Peters, like many East Kimberley painters, spent his youth working as a stockman on cattle stations throughout the Kimberley, and earned a reputation as an accomplished horse breaker. Along with other Gija community elders, Peters was influential in establishing the Ngalangangpum bicultural school – the first school at the main Gija community Warmun (Turkey Creek) – ensuring that instruction in Gija law and culture was prominent in the curriculum.

In 1989, Peters moved to Kununurra, where he worked as an assistant at Waringarri Aboriginal Arts, a community-owned Aboriginal art cooperative. He often worked closely with Rover Thomas, the East Kimberley’s most renowned painter and a co-founder of the regional contemporary painting movement. Although Peters occasionally produced small canvases during this period, he did not begin painting in earnest until 1998, after he had left Waringarri to join the newly founded Jirrawun Aboriginal Arts. Since then he has had a series of successful group and solo exhibitions, including the 2000–02 travelling exhibition Two Laws … One Big Spirit, in which he collaborated with artist Peter Adsett.

In his most ambitious canvas to date, the immense, twelve-metre long Waterbrain, 2002, Peters departs from the specific themes of country and Ngarrangkarni that normally form the focus of East Kimberley painting. Instead, he chooses to explore the cycle of life and learning that is universal to all peoples. Read from left to right, the canvas presents a chronology of the process of birth, growth and learning from conception to adulthood. At the lower left are waterweeds among which, according to Gija belief, the spirits of unborn children reside before entering the mother’s womb to become the spirits of human beings. The next panels deal with birth and infancy, when a child moves from crawling, to walking, to running, although his or her brain has yet to begin to absorb the teachings of his or her culture. The large circular motif at the centre shows the adult brain – the child has grown up and is beginning to have his or her own ideas. The next panels deal with the education that transforms a child into a full member
of adult society. As a symbol of the culmination of the individual’s education, in the final panels Peters depicts the artefacts his elders taught him to make and which, before the coming of European settlers, all Gija men needed to know how to create in order to survive.

Other works by Rusty Peters