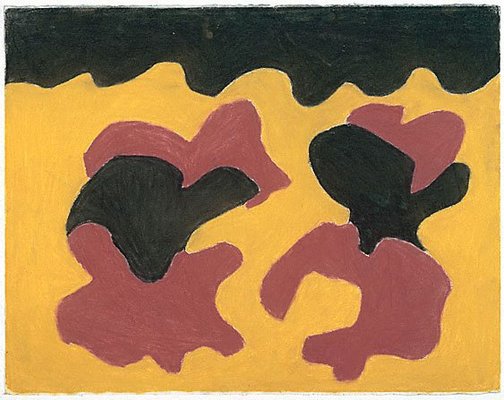 Rusty Peters was born at Springvale station south-west of Warmun. He grew up there, learning traditional law and worked as a stockman until he moved to Warmun after the introduction of award wages forced people off the stations. Peters helped start the bi-cultural school at Warmun with Hector Jandany and others and as part of the Gija cultural program he took groups of boys out bush to teach them traditional tool manufacturing and survival skills. He also worked in the Gija language maintenance program. In 1989 Peters moved to Kununurra and began work at Warringarri Arts where he assisted Rover Thomas and other artists and also worked packing the finished paintings, etc. He moved to Rugan (Crocodile Hole) and began painting for Jirrawun in 1997. The three works by Peters in this suite are representative of the first phase of his painting career using bright yellow as a signature colour. In the past two years he has changed his palette considerably as evidenced by the two paintings in the Art Gallery of New South Wales collection - 'Chinaman's Garden massacre', 2000 and 'Waterbrain', 2002. 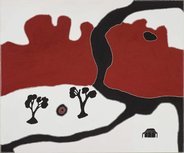