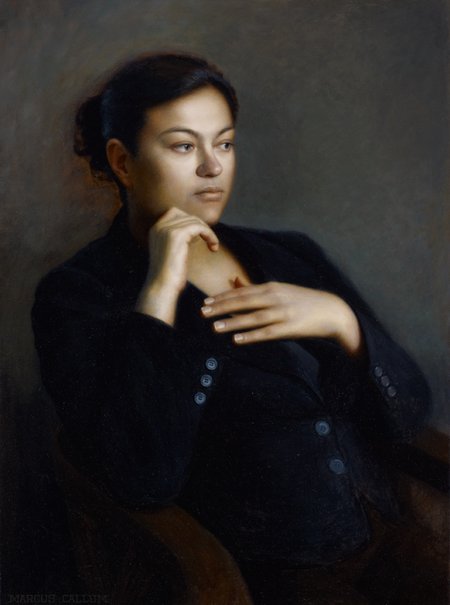 The subject of Marcus Callum’s portrait is his partner, Vanessa. He began the painting whilst she was heavily pregnant and completed it after she had given birth to their son Elvis.

‘This is the first portrait I have attempted of her and I hope I have managed to imbue the painting with a certain grace,’ says Callum.

‘I spent some time studying the masterful paintings of Jean-Auguste-Dominique Ingres for this portrait – specifically his portraits of Delphine Ramel and Louise de Broglie. I wanted to find a way to create a composition with both hands positioned fairly close to the neck and face, creating a solid block of light against the dark jacket. I wanted to guide the viewer around the portrait, giving emphasis to certain areas over others, so I took care to design how the fingers of the right hand connect to the thumb of the left and how the jacket lines flow toward Vanessa’s face.

‘For most of the painting I was fortunate to have my model present. After the birth of Elvis however, the sittings became understandably less frequent. It may be an art cliché, but I was truly trying to capture the soul of my sitter. I wanted to convey a contemplative strength but also a great beauty. The painting is very much a meditation. About two-thirds of the way through the painting, it seemed to take on an energy of its own; it became its own entity and dictated to me which way it must proceed. To me, this is what makes painting so fascinating.’