View of the Campo Vaccino 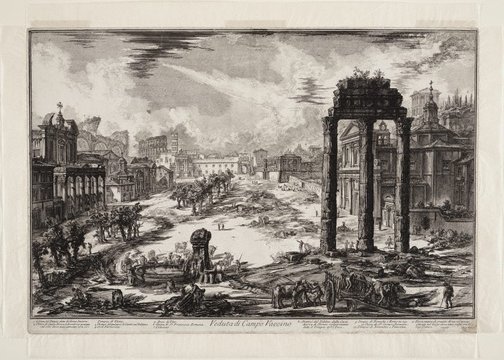 The scene is the Campo Vaccino, also known as the Roman Forum – the heart of social, political and religious life in ancient Rome. The site bears the traces of more than a thousand years of history that forged Roman civilisation. With the fall of the Roman Empire the buildings and monuments of the forum were abandoned and despoiled and the site became known as the Campo Vaccino (cow field).

This print is from a series of 135 etchings titled Vedute di Roma, which Piranesi worked on from the second half of the 1740s until his death some 30 years later. Piranesi’s formative years were in Venice, where he trained as an architect, however he made his livelihood from his prolific publications.

Piranesi first came to Rome in 1740 as draughtsman in the employ of the Venetian ambassador. The ruins of antiquity he saw around him ignited his imagination, and he settled in the city definitively in 1747. Although his views are founded on intensive archaeological and topographical study, they carry an imaginative force and exuberance that distinguishes them from much 18th-century Neo-Classical work.

In this etching the scale of the buildings has been cunningly amplified, the perspective exaggerated and the sky turned into a menacing patchwork of light and shade. The result, combining the artist’s taste for the theatrical and his respect for antiquity, is a grandiose record of the glory that was ancient Rome. The remains of the Temple of Castor and Pollux dominate the right foreground, overwhelming the rustic figures and their herds which populate the view. In the background the Colosseum rises above later Christian churches.

Piranesi’s prints were collected and circulated throughout Europe, helping to foster an appreciation for Roman architecture and give momentum to the classical revival. They also created – for the artist’s contemporaries and for posterity – an enduringly popular image of the Eternal City. In his Anecdotes of painting in England (1771), Horace Walpole praised the ‘sublime dreams of Piranesi, who seems to have conceived visions of Rome beyond what it boasted even in the meridian of its splendour … he has imagined scenes that would startle geometry, and exhaust the Indies to realise.’

Arthur Hind, Early Italian engraving: a critical catalogue with complete reproduction of all the prints described, Liechtenstein, 1970, p 65. no 100

Giovanni Battista PiranesiTomb of the three Curiatii brothers in Albano 1756169.1978