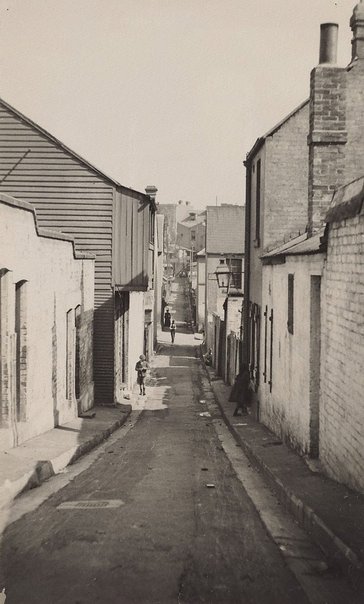 Harold Cazneaux was born in Wellington, New Zealand in 1878. His parents, Pierce Mott Cazneau and Emma Florence (née Bentley) worked in commercial studios in New Zealand before returning to settle permanently in Adelaide during the early 1890s. At the age of 18 Cazneaux went to work alongside his father at Hammer & Co studio as a retoucher. He moved to Sydney in 1904 to join the larger portrait firm, Freeman’s quickly ascending to the position of ‘chief operator’ (as camera portraitists were known). Studio work was highly formulaic, with little scope for creativity. Cazneaux used his time walking to and from work to experiment with pictorialist aesthetics 1.
Lane in Redfern is a complex picture, more subtly pictorialist than many of Cazneaux’s other street scapes. Its residential laneway setting, populated by a handful of independently occupied individuals, gives a photo-journalistic quality to the image. Yet, in another regard, Cazneaux seems to have selected the scene as a site to test the representation of concrete structures. The incisive potential of the straight street, cutting through the middle of the frame, is diluted by the uneven shadows which fall across the road from the terraces on the right-hand side. This creates a winding appearance to the road’s otherwise direct contours. This picture encapsulates, what Gael Newton has identified as Cazneaux’s enduring interest in the effects of natural light 2.
The Photographic Society of New South Wales organised an exhibition of Cazneaux’s photographs in 1909, the first such solo exhibition of its kind in Australia. In 1916 he and fellow pictorialist photographer, Cecil Bostock founded the Sydney Camera Circle. The group was particularly interested in the how pictorialism could be adapted to and extended within an Australian context. The mechanised, standardised and frenetic pace of Freeman’s increasingly took its toll on Cazneaux’s creativity and health, and he resigned in 1917. He moved with his wife and daughters to the Sydney suburb of Roseville, and in 1920 he was employed as the official photographer for The Home magazine. This new position let him work in a varied indoor and outdoor environments. In 1938 Cazneaux was awarded an Honorary Fellow of the Royal Photographic Society of London. He continued to work until his death in 1953.
1. Newton G 1988, ‘Shades of Light: Photography and Australia 1839-1988’, Australian National Gallery, Canberra p 85
2. Ibid 104