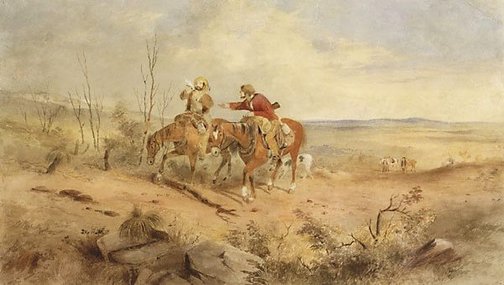 The son of a Baptist minister and schoolmaster, Samuel Thomas Gill was educated at his father's school in Devonshire, England, where his ability to draw was first noticed. He came to Australia with his parents in 1839 and soon after set himself up in a studio in Adelaide, advertising:

Gill is best known for his drawings, watercolours and lithographs of early colonial life and landscapes in South Australia, Victoria and NSW. He took an interest in the exploits of explorers Edward John Eyre and Charles Sturt and accompanied John Horrocks on his ill-fated expedition north of the Flinders Ranges in 1846. His images of life on the Victorian goldfields are among his most memorable, resulting in several lithographic series between 1852 and 1855. There are also two series of Sydney lithographs, dated 1856. A keen sense of humour is a feature of his work and a capacity for revealing the essentials of a subject.