Landscape with crater and cone 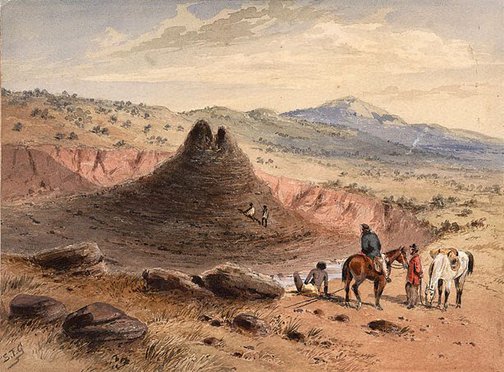 Gill based this drawing on a watercolour by Edward Charles Frome (1802-90), Surveyor-General of South Australia 1839-49. Frome and fellow government surveyor James Henderson (1821-1903) both made studies of this landform during Frome's northern Australian expedition of 1843 (Frome's watercolour is now in the collection of the Art Gallery of South Australia and Henderson's drawing in the Mortlock Library, State Library of South Australia). The site - east of the Flinders Ranges, between the Pasmore River (now Wilpena Creek) and what is now known as Lake Frome (where Mount Billy Creek passes through the hills, extending north of Reaphook Hill, now known as Freshwater Gap) - was discovered by fellow expeditioner George Charles Hawker on 29 July 1843. All believed it was the remains of an extinct volcano, Henderson recording it as:

'a very singular spot, which we had every reason to believe was the crater of an extinct volcano. Masses of scoria and ironstone lay strewn around in every direction ... the whole hill appeared to have been just raised from a subterranean fire, covered as it was with huge fragments of black scoria that seemed to have recently cooled'. (Quoted in Ian Auhl and Denis Marfleet 'Journey to Lake Frome 1843, paintings and sketches by Edward Charles Frome and James Henderson', Lynton Publications, Adelaide, 1977)

Geologists now describe the formation as a butt-like erosional feature originally formed by an ironstone diapiric intrusion or iron-blow. Gill was clearly attracted to the subject of Frome's watercolour. He emphasized the cone and crater shape in his versions in the Mitchell Library (State Library of NSW), the Art Gallery of South Australia and in this version.