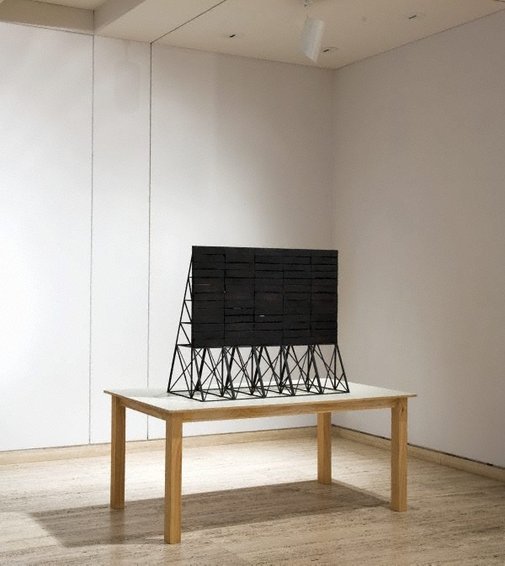 From large-scale architectural replicas to miniaturised versions of modernist houses replete with flashing lights and the voices of frustrated couples, Callum Morton’s work is adept at creating shifts in perception. Generating mood with light, sound and changes in scale, Morton transforms buildings and objects through disorientating their origins from a specific historical milieu. The result is a ricochet into contemporary times.

‘Screen #4’ is a miniature version of a drive-in cinema screen which has been torched until charred. Drive-in cinemas are now virtually redundant, a nostalgic reminder of the heyday of Hollywood. The first drive-ins were built in the 1930s and they reached their peak in popularity in the 1950s and early 1960s when in America there were over 4000 screens operating. These screens combined the 20th century icons of the film, modernist architecture and the motor car. In the post-war period they seemed to embody a utopian life in which machine, man and image were united rather than alienated, moving towards a better future together. However, just as political and social changes in the 60s disrupted the ‘American Dream’, built as it was on oppressive gender roles, racism and other exclusions, the drive-in was superseded as an outmoded form of entertainment. The reasons for this included the fact that teenagers had greater sexual and social freedoms and no longer needed the privacy of cars at drive-ins, the increase in real estate prices that made the large scale parking lots no longer economically viable, and the general decline in movie attendances with the invention of television.

Morton has dealt with the Utopian modernist architecture associated with the car before, as in the motorway that forms ‘Motormouth’ 2002, (AGNSW collection). The subject of the drive-in perfectly embodies his interest in the disjuncture between modernist ideals and dystopian realities. The drive-in screen showed the projections of Hollywood movies with all their dreams and ideals to mass audiences, and yet here the screen it is reduced to an ashen charred structure. As a blank surface on which these dreams and desires played out, the screen is now in ruins.

Browse other works by Callum Morton