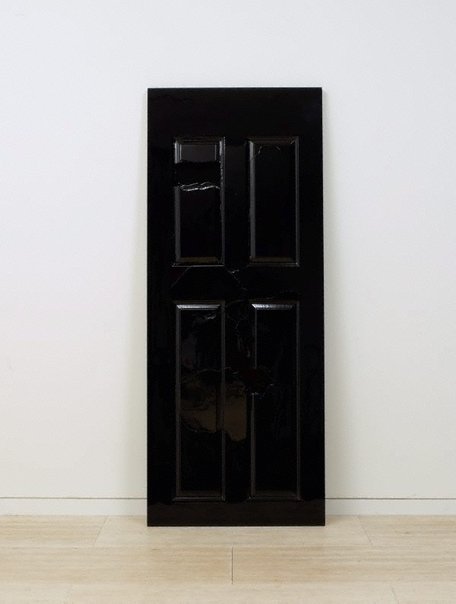 The title of Callum Morton’s ‘Door Door Too’ seems to ask to be rearranged to ‘door too door’. In scrambling the action of going from door too door to direct sell products to people in their homes, Morton signals the surreal departure from the very day this work enacts. In keeping with the punning title, it also seems to ask ‘Knock knock, who’s there?’

In Morton’s sculptural practice the ‘who’ has often been a consideration of architectural modernism as a source to explore realism in contemporary sculpture. Morton’s realism is not figurative, but usually structural or architectural. His works appear true to their source in that they seem to reproduce motorways or buildings in a faithful copy of an original, when in fact they are usually generic types which closely resemble the truth rather than replicating actual objects. Morton often distorts scale to further disorient the viewer and through the inclusion of sound tracks implies narratives or scenarios which unfold around his structures.

‘Door Door Too’ is a faithful copy of a household door, painted glossy enamel black. The implied narrative in this work is threatening, the door is cracked and broken – not from age or decay, but as if a massive force has been exerted on it. Whoever has knocked on this door has tried to force their way in. The door appears on its own leaning against the gallery wall, a self-contained object which no longer has a domestic context. It appears almost as evidence within the gallery, illustrating a violent act. Door to door salesmen were a feature of mid-century life in Australia, America and many other Western nations but have now largely disappeared, with the event of internet sales but also with the fear of home invasion that a stranger knocking on your door can provoke. This cracked door also suggests a supernatural presence at work and the vidual language of horror movies, a reference Morton has utilised in other works previously.

© Courtesy of the artist and Roslyn Oxley9 Gallery

Browse other works by Callum Morton