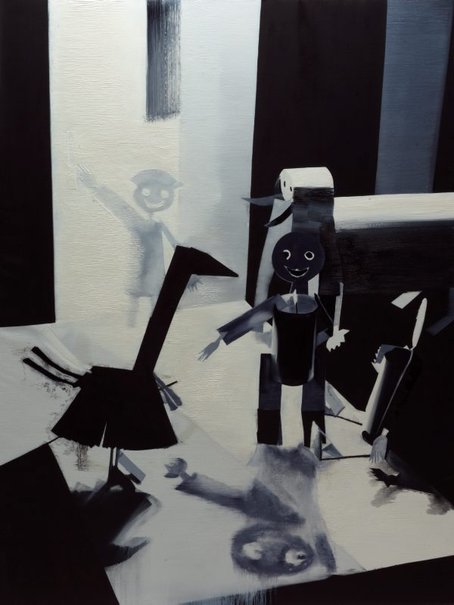 The series of over 30 paintings that this work belongs to were created by Milsom over a twelve month period. Milsom’s subject is a series of photographs from 1926 by Aleksander Rodchenko of paper cut outs made by his wife Varvara Stepanova. These photographs were intended to illustrate a children’s book of poems by Sergei Tretiakov entitled ‘Samozveri’, ‘Auto animals’ or ‘Self animals.’ The book was not published but the photographs appeared in two magazines ‘Sovetskoe kino’ and ‘Novyi Lef’. In the photographs Rodchenko experimented with perspective, dramatic angles and light and shadow to theatrical effect. The fact that the photographs were published in a cinematic magazine also suggests how they were viewed as closely connected with filmic animation.

In transcribing these photographs into paint Milsom has worked through many variations on the effect of painting light and shade. His palette is restricted to grays and whites, recalling the original black and white of the photographs. Yet inevitably the effect of paint on canvas is very different from the emulsion on paper of the original images and their subsequent reproductions. Milsom experiments with painting: brushing on, scraping back, cutting into, using both thicker impasto areas and watery passages and many other variations in order to capture the dramatic light, form and shadow of the originals.

In looking to the avant-garde past Milsom reinvigorates contemporary painting. While the figures have a sense of nostalgia for the original children’s book illustrations, they also seem somewhat ominous and threatening. The clunky cut out forms transcribed into paint has something of the quality of a horror film - the smiling inanimate forms seem to come to life and divorced from their original narrative context we are not quite sure what they want from us. If the utopianism of the Russian avant-garde seems naïve in retrospect after the mire of Stalinism, the cold war and eventual demise of Soviet communism; it was still a period of bold experimentation and an optimistic faith in the social power of art to contribute to a better world. Milsom’s work seems to teeter between something of this utopianism and an ironic distance from vantage point of the early 21st century.

Browse other works by Nigel Milsom