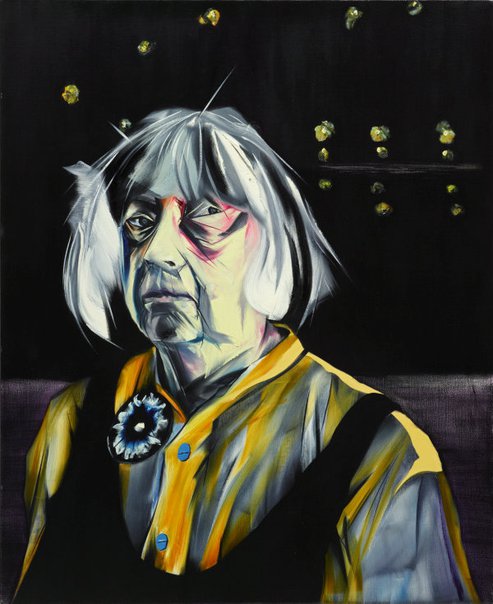 Nigel Milsom’s subject, Kerry Crowley, is an art dealer and a director of the Yuill/Crowley Gallery in Sydney, which she established in 1982. A well-known figure in the Australian art scene, she was awarded a Medal of the Order of Australia (OAM) in 2008 for service to contemporary art in Australia.
Milsom met her around 2000 while he was a student at the College of Fine Art. ‘The late Nick Waterlow introduced us,’ he says. ‘I was working at the Ivan Dougherty Gallery and, knowing that I was a student, she said I could come and do some work for her if I wanted. She now represents me.’

Despite being asked many times to sit for a portrait, this is the first time Crowley has agreed. (The Art Gallery of New South Wales holds a photograph of her by Lewis Morley in its collection, but she is seen from behind). Milsom sketched her at her gallery and then did some watercolours. The boldness of the portrait reflects a strong woman, unafraid to speak her mind. ‘She has a reputation for being a perfectionist and a bit difficult. She is to an extent but that’s because she holds her artists’ work so dear. She has a lovely warmth when you get to know her,’ says Milsom. ‘I’ve painted her in such a way her eyes look bloodshot. She said, “I like the black eye you’ve given me!”. It’s trying to allude to the hardships and beatings you cop over the years of being an art dealer. She’s a real fighter – a warrior woman.’

Milsom’s paintings start off black and white with tones of grey. ‘I slowly work over them then I get to a point where I know it needs to be more than a tonal exercise in representation and I let loose,’ he says. ‘After working on it for a few weeks, the portrait is made in that hour or two of adding colour and brushstrokes.’

Browse other works by Nigel Milsom