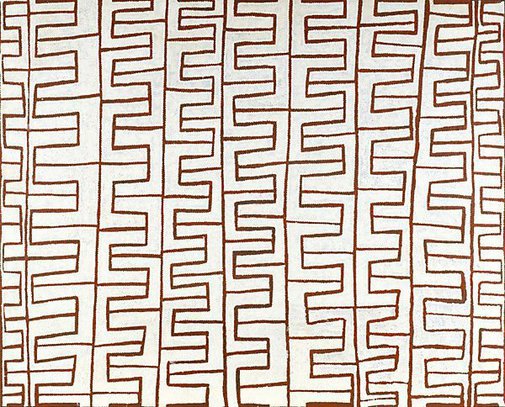 Ray James Tjangala's 'Untitled (Site of Yunala)' 1999 depicts designs associated with Yunala, west of Kiwirrkura community. In the past a large group of Tingari Men camped at this site before continuing their travels further east to Pinari, north of Kintore. While in this area they gathered the edible roots of the bush banana or silky pear (Marsdenia australis) that is plentiful in the region.

Ray James Tjangala is the son of Anatjari Tjampitjinpa one of the original Papunya Tula artists and brother of artist George Yapa Yapa Tjangala. Ray James spent a lot of time with Yala Yala Gibbs Tjungurrayi whose influence is apparent.

'Untitled (Site of Yunala)' 1999 is Ray James Tjangala's definitive work of this story. He stopped painting this subject as he considers it "too dangerous" to paint.

Ray James is one of the younger generation of artists and lives at Kiwirrkura. He has demonstrated a highly developed style, possibly a result of the influence of his elders.