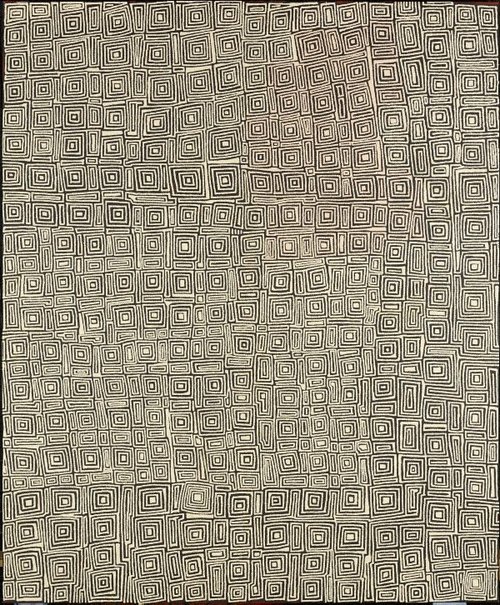 Ray James Tjangala was born at Yunala rockhole, west of Kiwirrkura. He is the son of Anatjari Tjampitjinpa, one of the original Papunya Tula artists, and Tjungkaya Napangati. Tjangala was encountered by Jeremy Long's Northern Territory Welfare Branch patrols in 1963 at Wudungunya rockhole north-west of Puntujarrpa (Jupiter Well). The family subsequently moved to Papunya in April 1964 where Tjangala attended school. However, the family soon moved to Waruwiya, Alumbara and Yayayi, as these outstations were established. Tjangala first painted for Papunya Tula Artists in 1987 when he was living at Walungurru (Kintore). By the late 1990s he had moved further west to Kiwirrkura and this return to his home country, along with the passing of many of the senior artists, invigorated his art, making him one of the most recognisable artists working for the company.

The art centre documentation for this works states: This painting relates to the soakage water site of Yunala, west of the Kiwirrkura community in Western Australia. In ancestral times a large group of Tingari men camped at this site before continuing their travels further east to Pinari, north-west of the Kintore community. While at Yunala they gathered the edible roots of the bush banana or silky pear vine Marsdenia australis, also known as yunala, which is plentiful in the region. The designs in the painting represent body paint worn by the men during ceremonies relating to Yunala.

Since events associated with the Tingari Cycle are of a secret nature, no further detail was given. Generally, the Tingari are a group of ancestral beings of the Dreaming who travelled over vast stretches of the country, performing rituals and creating and shaping particular sites. The Tingari men were usually followed by Tingari women and were accompanied by novices, and their travels and adventures are enshrined in a number of song cycles. These ancestral stories form part of the teachings of the post initiatory youths today as well as providing explanations for contemporary customs.