Sketch for 'The judgement of Paris' (variation 11) 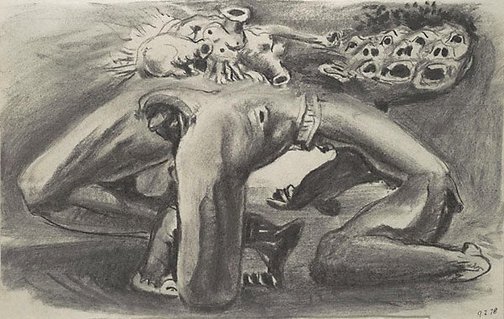 The judgement of Paris, taken from Greek (and Roman) mythology, has been a theme in art since classical times.

Paris, a Trojan prince, was given the task of judging the most beautiful of three goddesses - Hera (Juno), Athena (Minerva) and Aphrodite (Venus). Each promised a reward in return for being chosen, but in the end Paris chose Aphrodite, who promised him the most beautiful woman in the world, Helen, wife of the King of Sparta. The abduction of Helen by Paris sparked the Trojan War, which had been prophesied before his birth and in which he was killed. Gleeson is not interested in literal interpretation; rather, classical literature and biblical stories provide him with a spur to his imagination, and remain a continuing interest.

"The theme is a recurring one for me ...The event is ambiguous, double-edged. On the surface it is simply a beauty contest, but it had threads running through it that lead to the destruction of Troy and Trojan civilisation. So it had the ambiguity that always interested me...", Gleeson quoted in Renee Free's unpublished catalogue of James Gleeson's work

The subject first appeared in a painting by Gleeson in 1950 ('The judgement of Paris'), for which the AGNSW has a number of studies.

This drawing is one of twenty from a single drawing pad devoted to the judgement of Paris. Other related works include a portfolio of six four-colour lithographs produced in 1981 (printed by Fred Genis, published by the Port Jackson Press in an edition of 40) and a series of drawings in the collection of Frank O'Keefe.

James Gleeson
Sketch for 'The judgement of Paris' (variation 11)