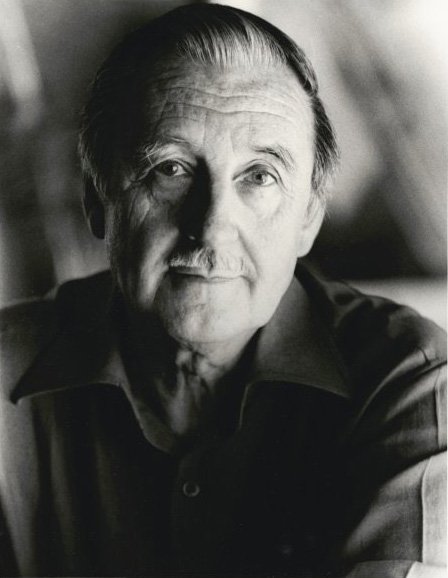 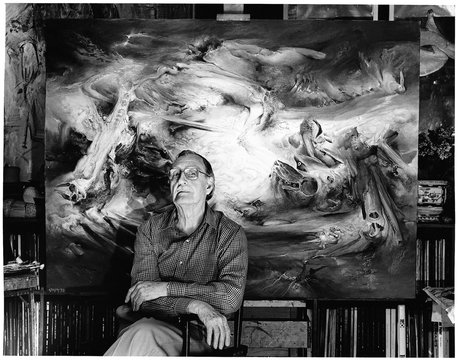 Renowned as Australia’s foremost surrealist painter and poet, James Gleeson’s oeuvre explores the human condition beyond visible reality and the limitations of the senses through powerful enigmas of fleshy biomorphic, mechanical and illusionistic landscape forms. In addition to his contributions to surrealism, throughout his career Gleeson made important contributions to the Australian art world as a dedicated writer, critic and affiliate of a number of art institutions.

Gleeson studied at East Sydney Technical College from 1934 to 1936, and then at the Sydney Teachers’ College from 1937 to 1938 where teacher May Marsden encouraged experimentation. His interest in Poussin, El Greco, Breughel and Blake instilled a love of the classical figure and myth, coupled with a concern for humanity that was deeply impacted by the Depression, the rise of Fascism in Europe and the build-up to the Second World War.

From 1938 through the 1940s Gleeson experimented with surrealism and produced apocalyptic evocations of the destructive powers of human nature generated from this atmosphere of uncertainty and tension. Inspired by writers and artists including Salvador Dalí, Max Ernst, André Masson, Sigmund Freud and Carl Jung, he utilised poetry, dream, mythology and chance elements as material for his paintings, collages and drawings.

Referencing Jean-François Millet’s 1850 work of the same title, Gleeson’s The sower, 1944 presents a chilling twentieth-century vision of a ravaged rather than fertile landscape dominated by a conglomerate central figure, the dislocated limbs of which express humanity out of gear. In 1993, Gleeson reflected on the painting’s genesis as a reaction to the traumas of intergenerational warfare:

I think that there was always the hope that it could influence the way people thought about war. That it could alert people to its horrors and prevent it occurring again. You see, I was born during the First World War in 1915, and my earliest experiences were with people who were in that war or remembered the war very vividly, and then, just when I was beginning to paint, the Second World War began. So war became a kind of lurking terror in my mind from infancy through to late adolescence, when it was all building up again for another one.

Seeking to make surrealism better understood in Australia, Gleeson wrote and lectured during the 1940s, and spent two years travelling and studying in England, France and Italy from 1947 to 1949. In London, he shared a studio with the Australian sculptor Robert Klippel. Together the two collaborated on No 35 Madame Sophie Sesostoris (a pre-raphaelite satire), 1947-48 based on the figure of the ‘famous clairvoyant’ in T. S. Eliot’s The Waste Land whose enigmatic predictions of her tarot cards are alluded to on the four miniature panels at the base of the sculpture. The figure carved by Klippel appeared to Gleeson just the way he imagined Madame Sosostris would look and also reminded him in a satirical way of the mysterious, melancholy women who gazed from the paintings of Dante Gabriel Rossetti and Edward Burne Jones. Gleeson titled the figure, distorted her name and cast her as a 'pre-raphaelite satire’. Both artists grappled with concepts of the internal and the external and their aim with this sculpture was 'to suggest the vital inner structure of an apparently simple form, to suggest that by some kind of x-ray magic one could look through the opaque skin and see all that lay within.’

From the 1940s through the 1970s Gleeson worked as prominent critic, writer and poet, writing for the Sydney Sun and Sun-Herald, and publishing seminal studies on William Dobell (1964) and Klippel (1983). He was also closely involved with the formation of collections at the new National Gallery of Australia in the lead up to its opening in 1982, and served on the Commonwealth Art Advisory Board and as Director of the Sir William Dobell Art Foundation.

In 1998 the Art Gallery of NSW held a focus exhibition on Madame Sophie Sesostoris (a pre-raphaelite satire) and an exhibition on Gleeson’s work entitled, James Gleeson: drawings for paintings, in 2006. Prior to his death in 2008, Gleeson and his partner Frank O’Keefe established the Gleeson-O’Keefe Bequest Fund which continues to facilitate the acquisition of major works of Australian modernism for the AGNSW collection, and honour the memory of Gleeson’s great contribution to Australian art.

Other works by James Gleeson