Throughout his studentship at Melbourne's National Gallery School, Hugh Ramsay studied the methods of a range of old master painters, but it was the work of Velasquez that he was most intent on pursuing when he left Australia for Europe in 1900. Ramsay's first-hand study of Velasquez would significantly enhance his formative painting practice, particularly his portrait painting, for which he had demonstrated obvious talent as a Melbourne student.

Painted during his initial year in Paris, 'The foil' (1901) suggests Ramsay’s study of Velasquez's methods for enhancing atmosphere, posing the lit figure against a darkened, unembellished backdrop. The sitter for the portrait was John Forrest Ramsay, the artist’s cousin. While guided by the influence of Velasquez's tonalism, 'The foil' is also testament to the range of artistic sources that were shaping Ramsay's painting practice at this time. The elongated format of the work alludes to the grand traditions of portraiture; to van Dyck's "refinement and poetry of line" that Ramsay wrote of from Paris, yet overall exudes an air of simplicity suggestive of contemporary portraiture, particularly the work of Whistler. The subject's pose, dress, backdrop and slim-line form all allude to a Whistlerian style of minimalism. However 'The foil' is ultimately stamped with Ramsay's own emerging subdued aesthetic, or his search, as Bernard Smith once claimed, for the 'true values [of] dark tones'.

Gift of the family of Hugh Ramsay 1943

Browse other works by Hugh Ramsay 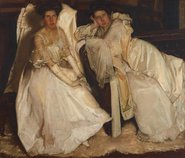