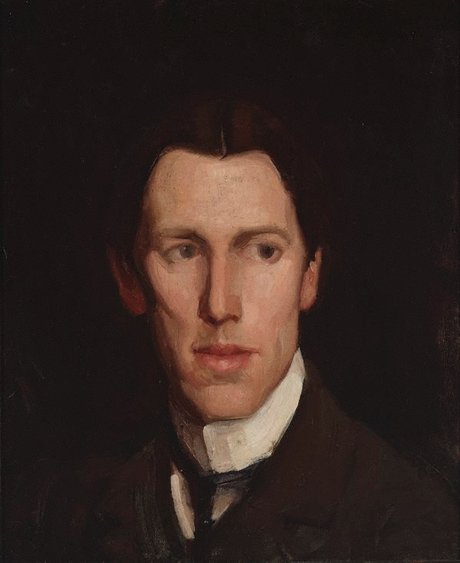 Hugh Ramsay’s gift for rendering subjects with great skill and sensitivity marks him as one of the significant portraitists in Australian art. He was a prodigious draughtsman and painter who died of tuberculosis on the brink of success at the age of 28.

Born in Scotland in 1877, Ramsay relocated to Melbourne with his family the following year. His father, a pastor and tradesman, was in search of a better life for his wife and their five children. Ramsay enrolled at the National Gallery of Victoria School in 1894 under the tutelage of Bernard Hall and Frederick McCubbin, where he excelled with both drawing and painting. It was while training there that he was introduced to the work of the neo-classicists and old masters – particularly Diego Velásquez, a key influence. After unsuccessfully applying for the 1899 Travelling Art Scholarship, Ramsay was encouraged by artist John Longstaff to travel to Europe in September 1900, which he financed by selling his paintings through the Art Union sales and with support from his older brother.

En route to London aboard the SS Persic, Ramsay struck up a friendship with George Lambert of Sydney, who would become a significant artist in his own right and owe a great deal of his development to his talented young companion. Ramsay arrived in Paris in January 1901, where he enrolled at the Académie Colarossi and was exposed to the Louvre collections and exhibitions of the work of his American and French contemporaries. His Portrait of James S Macdonald 1901 was accepted by the conservative ‘Old Salon’, and the following year three portraits and a still life were accepted by the progressive ‘New Salon’ and displayed favourably alongside work by distinguished contemporaries such as John Singer Sargent, Walter Sickert and James Abbot McNeil Whistler.

Ramsay’s reputation began to bloom and his Australian art-world connections also permitted him access to important social circles in London, notably that of expatriate opera singer Dame Nellie Melba. However, Ramsay’s graft and commitment proved to be his undoing as he contracted tuberculosis due to the long hours spent working in the impoverished conditions of his studio and living quarters. Forced to abandon his international career, he returned home to Melbourne in August 1902. In December, Dame Melba, on tour in Australia, organised Ramsay’s first and only solo exhibition at Myoora house in the Melbourne suburb of Toorak.

Despite his condition, Ramsay continued to work and exhibit at the Victorian Artists Society, and the last paintings he produced are among his greatest, including The sisters 1904. Ramsay died at his family’s estate, Clydebank, in Essendon, Victoria, in March 1906. He was ‘undoubtedly one of the biggest artists in portraiture and figure painting that Australia has produced’, as Sir Baldwin Spencer wrote in The Argus in 1918 – a legacy cemented by the staging of the Memorial Exhibition at the Fine Arts Society that year and a retrospective at the National Gallery of Victoria in 1943.

Ramsay’s realist portraits were characterised by Velazquez-inspired tonalism, prevalent in Melbourne during the 1890s. His quick and confident handling of oil lent his portraits a wonderful candidness which were indebted to the influence of Sargent. Ramsay also worked within other genres – including narrative and mythological subjects, still life, urban scenes and landscapes. He is perhaps best remembered by The lady in blue (Mr and Mrs J S MacDonald) 1902 and The foil 1901, which are among the Australian highlights in the Art Gallery of New South Wales collection.

Ramsay’s achievements overseas and impact locally are remarkable given his short period of activity and relative inexperience. The fact that he had not yet matured fully affirms his exceptional artistic talents and raises the question of what might have been possible if he had been able to reach his full potential.

Other works by Hugh Ramsay