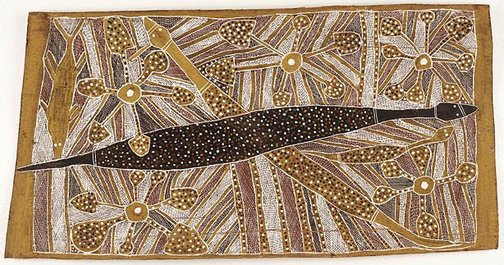 This is sacred to the Galpu group and is situated at Blue Mud Bay in a very large billabong named Farimula. The snakes are a harmless, fat, short variety of water snake that are good to eat. The people call them Jarung. The two snakes, one male and the other female, are resting after hunting. The spots near one snake are small stones. The spotted objects with radials are a type of waterlily. The centre is the flower and the radials are fruit.
Harry Messel