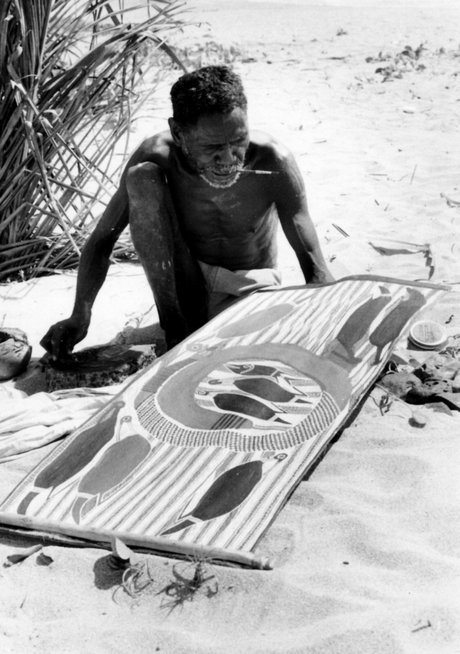 Mithinari Gurruwiwi learned to paint as a young man, with a group of Dhuwa moiety artists that also included Larrtjannga Ganambarr and Wandjuk Marika. They were taught by Wandjuk’s father, Mawalan Marika, at Beach Camp in Yirrkala. Mithinari belonged to a group of the Galpu clan, and his paintings mainly represent two areas of clan land: a coastal area on Caledon Bay and the inland country of Garrimala.

Mithinari was a prolific and passionate artist, with a reputation for eccentricity. He usually camped slightly apart from other members of his community, although often surrounded by his children, and painted on the beach under a shade of palm fronds stuck into the sand. Long after other artists began using European paintbrushes, Mithinari often continued working with brushes made of frayed stringy bark when applying the back-ground colour and drawing the main figurative components of his paintings. He infilled the design with brushes made of human hair or from the midrib of a palm frond. Mithinari painted with great speed and surety of hand. Scale was never a problem for him, and he adapted his compositions brilliantly to the size of the bark available, as in Djaykung (File snakes), c.1960, and Wuyal the Honey Man, c.1960.

Mithinari’s paintings are characterised by a diversity of forms but also have an overall coherence of stylistic elements. Yolngu art characteristically plays upon the relationship between figuration and abstraction. In Mithinari’s paintings, there is often an almost complete integration of the figurative representations with the geometric clan designs, creating a flowing composition. Many of his paintings of Garrimala appear to be bursting with the vibrant life of the rich inland lake as snakes, birds and fish compete with each other among the waterlilies. In other paintings, he reduces the figurative element almost to the point of abstraction, and the energy of the works abounds in the flash of the design.

Mithinari was one of the artists who worked on the 1962 Yirrkala church panels; around the same time he painted a series of superb large barks for the collector Dr Stuart Scougall. Mithinari’s works have appeared in many significant overseas exhibitions including ‘Australian Aboriginal Art’ in Chicago, 1972, and ‘Aratjara – Art of the First Australians’ in Düsseldorf, London and Humlebaek, 1993–94. Mithinari Gurruwiwi is represented in all Australian state galleries and in the Kluge-Ruhe Aboriginal Art Collection in the United States.