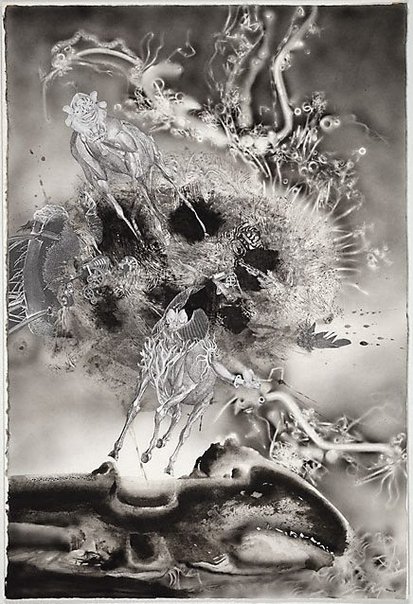 "When you make collages - and I did quite a few quite early in the piece - you bring together random elements. However, you do make a judgement on an aesthetic level as to whether they work or not. It doesn't matter whether they're related in a rational way or not, but they must work together aesthetically."
- James Gleeson 1993

Gleeson began making a large number of collages at a period when he was unable to paint consistently, due to commitments as an advisor to the National Gallery of Australia. They are complex juxtapositions of drawn and collaged elements; ink is applied to the paper in a number of ways - for example, with a brush onto dampened paper which is then pressed on a textured surface, leaving a ghostly impression, or using the technique of frottage, where the paper is rubbed with a crayon or wax, allowing a texture underneath to be superimposed on the image.

'Two hippocritters in tumultuous circumstances' is from one of his most important series of collages, the 'Locus-Solus' suite, derived from a surrealist novel by Raymond Roussel, also the name of a work conceived jointly by Gleeson and Robert Klippel between 1972 and 1978.