The image of the king riven by a bolt of lightning, is revealed as a silo of spaghetti 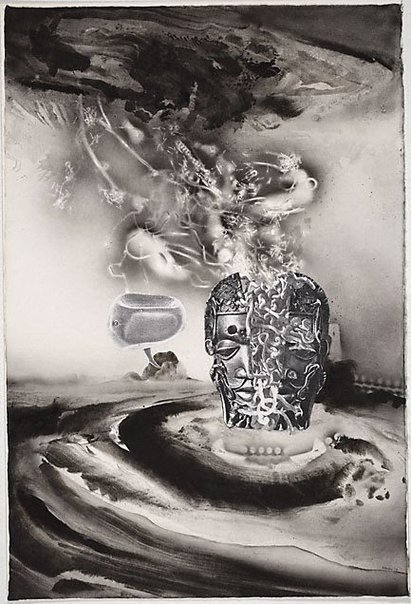 James Gleeson’s main interest as a devotee of surrealism was to open up the realm of the imagination, by expanding our conceptions of reality beyond the materially visible. He favoured collage for its ability to generate new, unfamiliar and unexpected forms, through chance and juxtaposition. Collecting photocopied images from books, magazines and newspapers, including illustrations of human and animal anatomy from medical texts or insect life under a microscope from science journals – he selected each element for its shape or texture.

This collage also incorporates frottage and decalcomania (rubbing and transfer techniques used by a number of surrealists, including Max Ernst) creating electrically charged visions of the bizarre and fantastical. It is from Gleeson’s most important series of collages of the late 1970s,
'Locus Solus suite', which took its title from a surrealist novel by French author Raymond Roussel.

James Gleeson
The image of the king riven by a bolt of lightning, is revealed as a silo of spaghetti