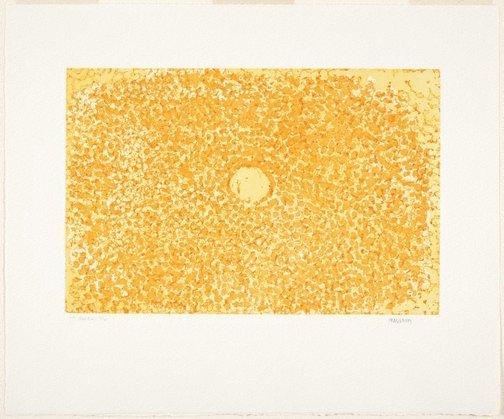 Eubena is the best known of Warlayirti Artists' many painters. She is one of the most esteemed law women in the community, being consulted and deferred to on all questions of law. Moogaga, Eubena's mother, taught her 'maparn' (healing) skills before she passed away, when Eubena was just a young girl. The family travelled and hunted, performing ceremonies and law for the upkeep of their country and their own spiritual preservation. Nomadic life was harsh and most of her extended family had passed away or moved to other parts of the country. Eubena talks of many 'sorry' times.

Eubena started painting with her second husband, Wimmitji in the mid 1980's. Their work shared a luminous and intricate complexity along with a love of the warm reds, oranges and yellows that continues to be Eubena's signature today. Eubena's reputation grew, as one half of the famous painting duo at Balgo, but also as a solo artist in her own right. Eubena has a spontaneity and strength of brush mark that carves the paint, leaving rhythmical tracks across the canvas.

During the printmaking workshop at Northern Editions, Northern Territory University in 1999, Eubena, together with Tjumpo Tjapanangka, Sam Tjampitjin, Billy Thomas, Helicopter and Lucy Yukenbarri all made etchings and screenprints, while most of the artists also painted on ceramic bowl forms, under the supervision of Rose and Angus Camerson. Eubena and Lucy's silkscreens were painted while they were in Darwin, so they were able to see the printing process and react to each colour as it was put down. Proofs of each of the etchings were also made during the workshop for the artists' approval.