Eubena Nampitjin was born in Tjinndjaldpa, south of Jupiter Well in the Great Sandy Desert, Western Australia. This area, on the Canning Stock Route and over 350 kilometres inland from Port Hedland, is one of the most remote places in Australia. Nampitjin had little contact with non-indigenous Australians until the late 1940s, when she travelled to Old Mission with her children and first husband. She moved with the mission in 1963 to its present site at Balgo, or Wirrimanu as it is traditionally known. Nampitjin is an elder of the Wangkajunga people, a custodian of women's law and the most senior woman artist working in the area. While at the mission, she has regularly returned to live in her country for extended periods.

Nampitjin started painting in 1986, when women were becoming more broadly included in the growing art movement centred on Wirrimanu. During that year she painted three canvases, one of which was included in the exhibition 'Art from the Great Sandy Desert' at the Art Gallery of Western Australia, Perth, at the end of 1986. Further impetus to paint came in 1989, when the new arts organisation, Warlayirti Artists, was formed. Nampitjin, her husband Wimmitji Tjapangarti and their daughters all painted, often collaboratively. Nampitjin was awarded the Open Painting prize in the Telstra National Aboriginal and Torres Strait Islander Art Award in 1998.

To outsiders, Nampitjin's homeland in the heart of the Great Sandy Desert may appear desolate on a map; but for the artist, it provides her impetus to paint and is full of life and significance. The surface of 'Pinyu', 1991, is a metaphor for the surface of her country. She represents its sacred rocks, which are associated with Kurinyin, a dingo from the Tjukurrpa. She also depicts a number of waterholes that the artist and her family used when she was younger, and the women's dancing tracks. 'Pinyu' was painted during a transitional period for the artist, between her early works, from 1988-90, which were distinguished by their strongly defined forms and web of complex dotted fields and her later, more fluid style, in which she manipulates colour exuberantly. Christine Watson has observed, '... the 1990-92 works, though at this time using a lighter-hued palette of yellow, pink and white, and delicate dotting applied with painting sticks, are rich and subliminal, even-grained textures that continue in the higher-keyed site-path works of late 1992-94.' 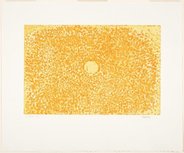