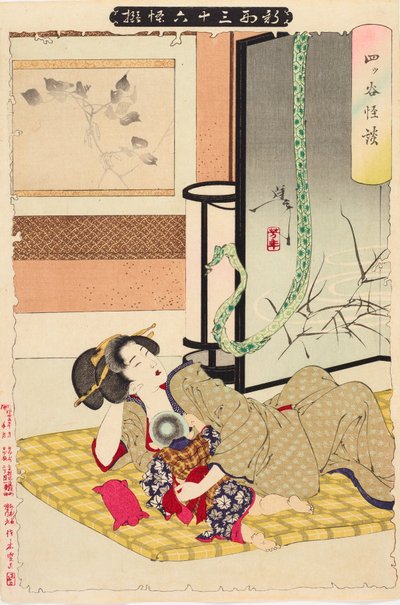 Ostensibly tranquil, this scene shows Oiwa feeding her infant. Shortly after, she was poisoned by her neighbour Oume who coveted Oiwa’s husband, Iemon. When the poison made Oiwa hideous, cruel Iemon could not stand to look at her and his behaviour drove Oiwa to suicide. A servant chastised Iemon for his abuse of Oiwa and Iemon murdered him. He nailed them both to a plank which he threw in the river. Iemon then married Oume, but when he lifted her wedding hood it was Oiwa’s face he saw. He then murdered his new bride and her father, who he mistook for the dead servant. He later drowned himself. Perhaps Japan’s most famous ghost story, the Yosuya ghost story premiered on the kabuki stage in 1825 and first appeared in cinema in 1912.